Senior Congress leader Kapil Sibal on Monday demanded the setting up of a judicial inquiry headed by a sitting judge to probe the Lakhimpur Kheri violence. 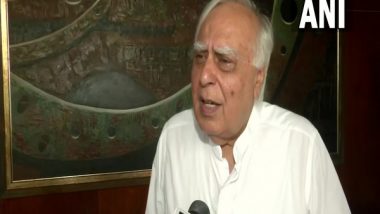 New Delhi, October 4: Senior Congress leader Kapil Sibal on Monday demanded the setting up of a judicial inquiry headed by a sitting judge to probe the Lakhimpur Kheri violence.

Speaking to ANI, Sibal said, "As a citizen, I think there should a judicial inquiry by a sitting judge. Before that, the Union Minister must be dismissed or suspended at least during the inquiry as the incident took place with respect to his convoy."

Also Read | Mumbai Shocker: Man Smothers 10-Month-Old Girl to Death in Goregaon To Spite Her Father Due to Long-Standing Feud.

He also said that the inquiry should not be conducted by their own people who will defend these inquiries.

Reacting to the Lakhimpur Kheri incident, Sibal said, "This is the symbol of the arrogance of political party that is power. The ruling party is giving a message that they can do whatever they want and even run a car over those who are protesting."

He also said that the Prime Minister is elected from Uttar Pradesh and the home minister is responsible for the state of the affairs in the country.

"None of them has spoken and they will not speak because their intention is to send a message to the public that if you protest against us, we will run over you," Sibal alleged.

He also raised the concern about the treatment that Congress leaders received in Lakhimpur Kheri. Sibal said, "See the way they have treated Priyanka Gandhi Vadra, Deepender Hooda. They have the right to go there. I congratulate them for the step, but the way they are being treated shows the symbol of arrogance."

As many as eight people died in the Lakhimpur Kheri incident on Sunday.

Samyukta Kisan Morcha, an umbrella body of several farmer unions, alleged that Ashish Mishra Teni, son of Union Minister of State for Home Affairs Ajay Mishra Teni arrived with three vehicles around the time that farmers were dispersing from their protest at the helipad and mowed down farmers and towards the end also attacked SKM leader Tajinder Singh Virk directly, by trying to run a vehicle over him.

However, Ashish Mishra refuted SKM's allegations and said he was not present at the spot where the incident took place.

MoS Teni also said that his son was not present at the spot, adding that some miscreants mingled with protesting farmers and pelted the stones at the car which lead to the 'unfortunate incident'.