Categorised as special voters, they are also given an option of postal ballot, which would be opened on counting the day, December 16. 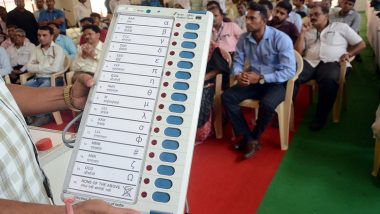 The voting that started by 7 am witnessed brisk polling in the initial hours with 50 per cent voters exercising their franchise by afternoon. After the closing of voting for regular voters by 6 pm, COVID-19 patients and those in quarantine were allowed to vote, though the numbers remained low. Categorised as special voters, they are also given an option of postal ballot, which would be opened on counting the day, December 16. Also Read | John Abraham, PETA India's Person of the Year 2020 Feels Living in Harmony with Birds, Animals Makes Us Better Humans.

Of the five districts that went to the polls today - Thiruvananthapuram recorded 69.76 per cent polling, Kollam saw 73.41 per cent, Pathanamthitta 69.70 per cent, Alappuzha 77.23 per cent and Idukki witnessed 74.56 per cent.

The turnout in Kollam Corporation was 59.73 per cent while in Thiruvananthapuram Corporation 66.06 per cent voters cast their votes. Municipalities and Panchayaths also recorded good voter turnout.

In a tri-corned fight between Left Democratic Front (LDF), United Democratic Front (UDF) and National Democratic Alliance (NDA), leaders of all parties expressed hope that the better voter turnout would help their party. Also Read | Amit Shah’s Meeting With Farmer Leaders: Government Not Ready to Take Back Farm Laws, to Give Written Proposal; No Meeting With Govt Tomorrow.

The local body polls are being held in three phases in Kerala. The first phase will be followed by the second phase on December 10 and the final phase on December 14. Votes will be counted on December 16.(This is an unedited and auto-generated story from Syndicated News feed, LatestLY Staff may not have modified or edited the content body)