Earlier on Wednesday, Mamata Banerjee took oath as the Chief Minister of West Bengal for the third consecutive term. 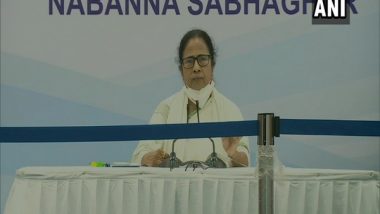 Kolkata, May 10: West Bengal Chief Minister Mamata Banerjee on Monday allowed religious and cultural programmes ahead of the upcoming festival of Eid. However, a cap has been placed on 50 people. Eid prayers and gathering at Red Road in Kolkata will also not be held this year amid the surge in coronavirus cases.

"In this COVID-19 situation, we have allowed religious and cultural programs with a maximum of 50 people. No Eid prayers and gatherings will be there at Red Road as decided by Muslim leaders. I request that there should be no big gatherings as Azaan can be heard from home," the Chief Minister said.

She also said that strict measures have been taken to control the spread of coronavirus in the state.

"We have taken strict measures to curb the virus," she said while addressing a press conference at the state secretariat following the first cabinet meeting of her newly formed government. Eid al-Fitr 2021 Dessert Recipes: From Sheer Khurma to Shahi Tukda, Here Are 5 Sweet Dishes You Can Prepare to Celebrate This Muslim Festival (Watch Videos).

As many as 43 Trinamool Congress (TMC) leaders were sworn in as ministers in Mamata Banerjee's Cabinet today here at Raj Bhavan. Earlier on Wednesday, Mamata Banerjee took oath as the Chief Minister of West Bengal for the third consecutive term.