The central excise duty on petrol was Rs 9.28 in 2014 and now has risen up to Rs 31.83 in 2021. In January and February, prices were hiked 10 and 16 times, respectively, he said. With the global prices of crude dipping and rupee relatively stable, Indians should have been paying less for fuel, Moily argued. 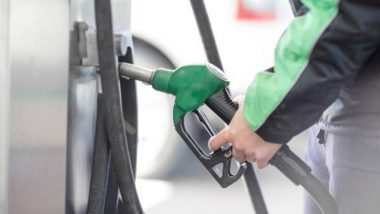 New Delhi, June 12: Slamming the Centre over rising fuel prices, former petroleum minister M Veerappa Moily on Saturday said the government is solely responsible for the "illogical price regime" and demanded that petrol and diesel be brought under the purview of the GST regime.

Moily said India levies one of the highest taxes on petrol and diesel in the world, and asserted that this "illogical taxation liability" will have to be halted immediately. After the Modi government took over reins of India in 2014, the pattern of taxation has been such that it has led to petrol prices crossing Rs 100 per litre in several districts in the country, he said in a statement.

The central excise duty on petrol was Rs 9.28 in 2014 and now has risen up to Rs 31.83 in 2021. In January and February, prices were hiked 10 and 16 times, respectively, he said. With the global prices of crude dipping and rupee relatively stable, Indians should have been paying less for fuel, Moily argued. Fuel Price Hike: Both Petrol and Diesel Breach Rs 100 Per Litre Mark in Rajasthan's Sri Ganganagar.

In the last 14 months, international oil prices have gone down by around five per cent in dollar terms and in this scenario, the retail prices of petrol and diesel, in rupee terms, should drop at least by five per cent as compared to January last year, instead they are 20 per cent higher, the Congress leader said.

Petrol and diesel are not part of the Goods and Services Tax (GST) but attract excise duties from the Centre and value added tax from states that make them one of the highest-taxed commodities in the country, he noted.

This is the right time to impose GST on petrol and diesel and give up the present adhocism which has contributed to both inflation and also caused irreparable damage to both internal and external trade, Moily alleged.

The system of subsidy by oil PSUs and the government has been given up after the National Democratic Alliance took over in 2014 and hence, the entire burden falls on the consumer, he said.

"They are now thinking of selling away the sound PSUs. Oil bonds were issued by the UPA government when fuel prices were regulated. In doing so, the government shielded customers and domestic businesses from the vagaries of the global market for crude oil. By raising capital through bonds, the payments could be made in a deferred manner without causing a major escalation in prices, thus insulating customers," he said.

The taxation policy of the present regime is totally flawed and the frequent hike in prices of petrol and diesel has contributed to the distress and sufferings of the people during the present Covid pandernic, Moily said. He alleged that the government of India is solely responsible for the illogical price regime and contributing to the miseries of the people in a large way.

"When inflation is galloping, there are job losses and business is collapsing. It is the duty of the central government to have checks and balances on the fuel prices," Moily said. Many sectors have dipped to the lowest levels in May 2021 and corporate sentiments have further deteriorated, he said.

The prime minister should wake up and respond to the miseries of the people of this country, Moily added. The Congress Friday demonstrated in several parts of the country against the rising fuel prices, during which over 150 members were detained in Gujarat, Delhi and Uttar Pradesh for allegedly violating Covid protocol and protesting without permission.

The protests, in response to a call given by the Congress leadership, came on a day when another hike -- the 22nd since May 4 -- pushed the fuel prices across the country to historic heights.