Get latest articles and stories on India at LatestLY. While the fire-tenders allegedly reached the Mundka fire incident site late, a crane driver proved a saviour for over 50 people, mostly women, by rescuing them while the building was engulfed in razing fire. 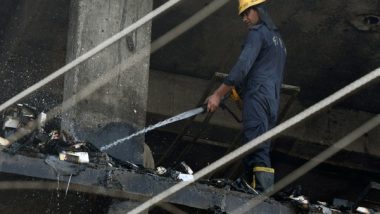 New Delhi [India], May 15 (ANI): While the fire-tenders allegedly reached the Mundka fire incident site late, a crane driver proved a saviour for over 50 people, mostly women, by rescuing them while the building was engulfed in razing fire.

Dayanand Tiwari was driving the crane along with the owner of the vehicle when he approached the ill-fated four-storey building caught in fire, with fire-tenders allegedly not in sight on May 13.

The fire incident claimed 27 lives while a number of people are reported to be missing.

Tiwari managed to save more than 50 lives with the help of the crane and the local bystanders. He, however, was saddened for not saving more people as the razing fire had spread quickly.

"I was coming from Mundka Udyog Nagar when I saw the fire in the building. With the help of the crane, we rescued over 50 people, mostly women," he said

Tiwari, who had the crane owner and a helper on his aide, recalled the horrific incident and said that the fire tenders had reached the spot after one and a half hours.

"Later, the fire turned huge and we could not rescue others. Our crane owner and helper were also present during the rescue operation. It was a very frightening sight," he said.

On Sunday, two forensic science teams reached the site of the fire mishap to assist the Delhi Police in the investigation of the Mundka fire incident.

The charred remains of the victims have also been found at the site. The police have said that a forensic DNA examination would be carried out to identify the identities of the deceased.

"Our two teams, including senior experts, are working at the spot currently. They will identify the remains, and lift samples for the purpose of identification. The experts from FSL will be assisting police in identifying and lifting samples from the spot which will be later handed over to the Investigating Officer," said Deepa Verma, Director, Forensic Science Laboratory in an official statement.

Meanwhile, SK Gupta, who is heading the forensic operations, said that body remains at fire-related crime scenes are very difficult to detect, collect and handle.

"Burned exhibits like body tissues at the scene are often modified to a similar appearance, and bones, in particular, become discoloured, brittle, and highly fragmented," Gupta said.

Rajnish Singh, Assistant Public Relations Officer of the FSL, said that the impact of the fire is severe on all the floors of the building and the body remains are disturbed, altered, and destroyed.

"It is very challenging for our experts to identify and collect these exhibits at the crime scene, however, a detailed inspection of the crime fire site is going on and whatever exhibits we have collected will be handed over to Investigating Officer. Since it is a large area, a complete examination of the scene will take time," he added.

A total of 27 people died and several people were injured in the fire incident near Mundka Metro station on May 13. A total of 50 people have been rescued, according to the Deputy Commissioner of Police (Outer District), Sameer Sharma.

Of the 27 retrieved bodies, only seven have been identified till Saturday afternoon. (ANI)