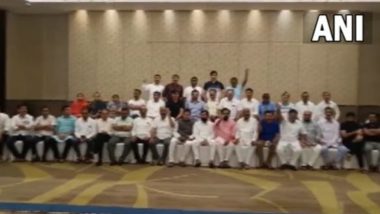 Assam, June 26: Amid the political crisis in Maharashtra, rebel Shiv Sena leader Eknath Shinde has called a meeting of MLAs camping with him at a hotel in Assam's Guwahati on Sunday to discuss the strategy ahead.

The political turbulence in Maharashtra was triggered by the faction war in Shiv Sena after Minister Eknath Shinde flew to Surat with some MLAs and then to Guwahati where he claims of having the support of 38 MLAs of the 55 Shiv Sena legislators, which is more than two-thirds of the party's strength in the 288-member Maharashtra Legislative Assembly. It means that they can either leave and form another political party or merge with another without being disqualified from the state assembly.

According to sources, Maharashtra deputy speaker Narhari Zirwal has sent notices to the 16 Shiv Sena rebel MLAs. The MLAs have to be present in Mumbai on Monday for the hearing of disqualification. Notably, Zirwal has earlier approved the appointment of Ajay Choudhary as Shiv Sena Legislature Party leader, replacing Shinde, the state cabinet minister who rebelled against the Shiv Sena leadership.

Earlier on Saturday, rebel MLA Chimanrao Patil on Saturday expressed dissatisfaction over Shiv Sena's alliance with its "traditional rival" parties, Congress and NCP and said that they had urged Chief Minister Uddhav Thackeray to stitch a "natural alliance".The leader, however, added that there was no response from the Chief Minister which is why Eknath Shinde, who is leading the faction, "took a stand".

"We are traditionally the rivals of NCP and Congress, they are our primary challengers in constituencies. We requested CM Uddhav Thackeray that natural alliance should be done," said Shiv Sena rebel MLA Chimanrao Patil in a video tweeted by Eknath Shinde. Patil claimed that the faction has the support of two-thirds of the Shiv Sena MLAs along with 10 independents.

"We strongly condemn the treachery that a few Shiv Sena legislators have displayed and express that the party and its organisation is strongly standing behind party leader Uddhav Thackeray. The party gives all the rights to

Thackeray to exercise control over the emerging scenario and to implement decisions required for the same," the resolution read. "The national executive expresses its pride in the work Uddhav Thackeray has done as the chief minister of Maharashtra and the fame that he has earned for his taking care of the Maharashtra populace during Covid," read the second resolution adopted by the national executive.

As rebels continue to camp in Guwahati, some of their offices were vandalised allegedly by Shiv Sena workers in Maharashtra. Following this, Shinde on Saturday wrote to Uddhav Thackeray over the alleged 'malicious' withdrawal of security of family members of the 38 MLAs camping with him in the Guwahati hotel.