Get latest articles and stories on India at LatestLY. The Central Bureau of Investigation (CBI) on Thursday opposed the bail petition of Anand Subramanian in connection with National Stock Exchange (NSE) co-location case and said economic offences constitute a class apart having deep rooted conspiracies involving huge loss of public funds, affecting the economy of the country as a whole posing serious threat to the financial health of the country. 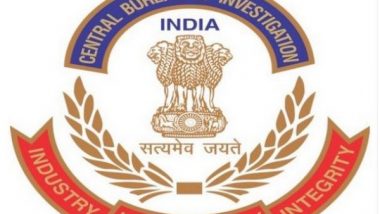 New Delhi [India], July 7 (ANI): The Central Bureau of Investigation (CBI) on Thursday opposed the bail petition of Anand Subramanian in connection with National Stock Exchange (NSE) co-location case and said economic offences constitute a class apart having deep rooted conspiracies involving huge loss of public funds, affecting the economy of the country as a whole posing serious threat to the financial health of the country.

It noted that is required to be visited with a different approach in a matter of bail.

CBI in its status report stated that the Petitioner Anand Subramanian is highly influential and is capable of influencing the witnesses. Examination of other witnesses is being carried out to unearth the whole conspiracy related to co-location set up.

In case the Petitioner is enlarged on bail, he may contact the important witnesses and destroy the e-mails or digital evidence.

Subramanian, former Group Operating Officer and ex-advisor to former MD of NSE Chitra Ramakrishna was the first person who was arrested by CBI in NSE co-location case February this year.

The Trial Court had earlier refused to grant bail to Anand Subramanian.

Senior Advocate Vikas Pahwa appeared in Delhi HC for petitioner Anand Subramanian and submitted that the allegations contained in the FIR are concerned, and the applicant has been wrongly implicated in the case, since he is not connected in any manner with the allegations so leveled.

The bench of Justice Sudhir Kumar Jain on Thursday deferred the matter for Friday after noting that the bail petition of Chitra Ramakrishna is already pending for tomorrow in the same FIR.

According to the CBI, on the basis of the evidence collected during the course of investigation it has been established that Petitioner and co-accused Chitra Ramkrishna entered into criminal conspiracy and in pursuance to the same co-accused Chitra Ramkrishna abused her official position as Joint MD as well as MD of NSE to illegally and arbitrarily appoint Petitioner as Chief Strategic Advisor to MD.

CBI also stated that in pursuance to the criminal conspiracy, co-accused Chitra Ramkrishna arbitrarily and disproportionately hiked the compensation of Petitioner and re-designated him as Group Operating Officer without taking approval of NRC or Board.

In pursuance to criminal conspiracy, co-accused Chitra Ramkrishna exercised undue influence on the concerned departments while sending replies to SNACO and SEBI. Thus, Petitioner and co-accused Chitra Ramkrishna have committed offences punishable 'U/s 120-B IPC r/w 13 (1)(d) r/w 13 (2) PC Act. 1988' and substantive offences thereof, accordingly report under section 173 Cr.P.C. was filed against them on 21.04.2022, stated the status report of CBI.

CBI status report further stated that the investigation into allegations regarding leakage of data unauthorizedly from NSE established that co-accused Chitra Ramkrishna, the then MD & CEO of NSE was communicating with an external e-mail ID "rigyajursama@outlook.com" through her e-mail IDs.

In this connection, a search was conducted at the premises of Petitioner, the then Group Operating Officer &Advisor to MD of NSE.

In his disclosure statement, he admitted having operated the said e-mail ID "rigyajursama@outlook.com" and accessed the said e-mail ID in the presence of independent witnesses. At the instance of Petitioner and the disclosure statement made by him, incriminating e-mails were recovered. MLAT request has been sent to USA for getting the complete details of this email-id.

CBI earlier in Trial Court had submitted that 832 GB of data was recovered, and has written to Microsoft to give us the complete data as he deleted material and certain emails.

Earlier, CBI submitted that it is seriously looking at all the aspects of the investigation and a special team of 30 official consisting of senior official to probe the case. It is also probing the role of SEBI officials in the matter.

The CBI is probing the alleged improper dissemination of information from the computer servers of the market exchanges to the stock brokers.

Earlier The Securities and Exchange Board of India (SEBI) has penalized the National Stock Exchange (NSE) and its former CEOs Chitra Ramakrishna and Ravi Narayan and two other officials for lapses in recruitment at the senior level.

The market regulator SEBI observed that the NSE and its top executives violated securities contract norms relating to the appointment of Anand Subramaniam as group operating officer and advisor to the managing director. (ANI)