COVID-19 In Mumbai: Over 86% of City's Population Has Antibodies Against Coronavirus, Reveals Latest Sero-Survey

As much as 86.64 percent of Mumbai's population has developed antibodies against coronavirus as per the latest sero-survey, the Brihanmumbai Municipal Corporation (BMC) claimed on Friday. 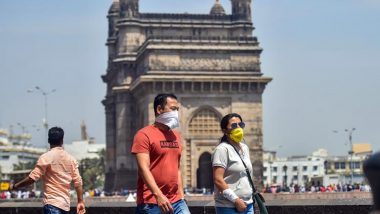 Mumbai, September 17: As much as 86.64 per cent of Mumbai's population has developed antibodies against coronavirus as per the latest sero-survey, the Brihanmumbai Municipal Corporation (BMC) claimed on Friday. The survey, fifth since the onset of the pandemic, was conducted between August 12 and September 9, 2021, the civic body said in a release. The sero-prevalence (presence of antibodies) in slums was 87.02 per cent, while it was 86.22 per cent in other areas, it said.

"Overall sero-prevalence in slum and non-slum areas in the city of Greater Mumbai is much higher in comparison to the last survey," the BMC said, adding that there was no significant difference in sero-prevalence of Mumbai `island city' and the suburbs. Further, as many as 90.26 per cent of those partially or fully vaccinated were found to have antibodies, while the proportion was 79.86 per cent in the non-vaccinated population. COVID-19: Over 1.27 Lakh Women Vaccinated in Mumbai.

There was a marginal difference gender-wise. Among women there was 88.29 per cent sero-prevalence compared to 85.07 per cent in men. Age-wise, sero-prevalence varied from 80 per cent to 91 per cent. The sero-prevalence in healthcare workers was 87.14 per cent. Of total 8,674 samples examined during the survey, 20 per cent were of health workers. The survey was conducted by the public health department and three civic hospitals with the support from A.T.E. Chandra Foundation and IDFC Institute. Third Wave of COVID-19 in Maharashtra? Mumbai, Nagpur on Brink of ‘Potential Third Wave’ of Coronavirus; Authorities on Alert Ahead of Ganpati Utsav 2021, Restrictions Likely.

It included participants above 18 years from all 24 wards of the city. Sero-prevalence among people who were vaccinated was much higher than those who had not been inoculated. The civic body, however, urged people to continue following the COVID-19 safety protocol. "Even if antibodies are found, precautions such as use of masks, hand hygiene and maintaining safe distance must be followed," the BMC appealed.