Gupta, a former vice-chairman of the State Advisory Board for the Development of Polari-Speaking people, was admitted to the hospital some days ago. He died of a cardiac arrest. 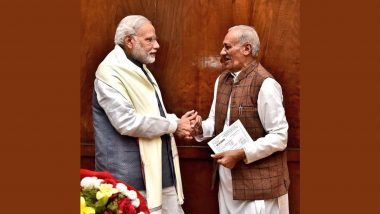 New Delhi, August 18: Prime Minister Narendra Modi on Thursday condoled the death of BJP leader from Jammu and Kashmir Kuldeep Raj Gupta, saying he dedicated his life to the welfare of people. The 87-year-old veteran BJP leader died after a brief illness at the Government Medical College Hospital in Jammu on Wednesday.

"Deeply saddened by the demise of Kuldeep Raj Gupta, a popular BJP leader from Jammu and Kashmir. He dedicated his life for the welfare of the people as well as for the empowerment of the society," Modi said in a tweet in Hindi. "May God give strength to his family and supporters in this hour of grief. Om Shanti," the prime minister said.

Gupta, a former vice-chairman of the State Advisory Board for the Development of Polari-Speaking people, was admitted to the hospital some days ago. He died of a cardiac arrest. PM Narendra Modi Urges People To Share Ideas for Upcoming Episode of ‘Mann Ki Baat’.

Hailing from the border district of Rajouri, Gupta was associated with the Praja Parishad Movement from a young age and later, became an active member of the Bharatiya Jana Sangh (BJS).

He worked with former Jana Sangh All-India president and founder of Praja Parishad Movement Pandit Prem Nath Dogra and other senior leaders, and played an active role during the Praja Parishad agitation of 1952.