Republic Day Parade 2022 is all set to showcase India's military might, cultural diversity, and many unique initiatives to mark the celebration of the 75th year of Independence as part of 'Azadi ka Amrit Mahotsav'. President Ram Nath Kovind will lead the Nation in celebrating 73rd Republic Day on January 26, 2022. 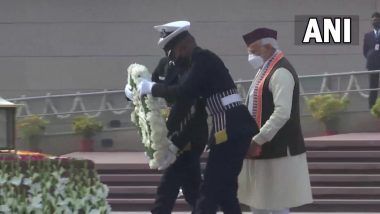 Defense Minister Rajnath Singh, Minister of State for Defense Ajay Bhatt, Defense Secretary, Ajay Kumar, and the Chiefs of the three wings of the Army, ie, Army, Air Force, and Navy, were also present on this occasion.

Thereafter 'two minutes silence' was observed, after which the buglers sounded 'Rouse and guards presented 'Salami Shastra' again. The Prime Minister then endorsed his remarks in the digital Visitor's Book of National War Memorial. Later, PM Modi and other dignitaries will head to the saluting dais at Rajpath to witness the Republic Day parade.

Republic Day Parade 2022 is all set to showcase India's military might, cultural diversity, and many unique initiatives to mark the celebration of the 75th year of Independence as part of 'Azadi ka Amrit Mahotsav'. President Ram Nath Kovind will lead the Nation in celebrating 73rd Republic Day on January 26, 2022.

The celebrations this year are special as Republic Day falls in the 75th year of Independence, being celebrated as 'Azadi ka Amrit Mahotsav' across the country.

To mark the occasion, the Ministry of Defence has conceptualized a series of new events during the main parade on Rajpath on January 26 and the 'Beating the Retreat' ceremony at Vijay Chowk on January 29.

It has been decided that the Republic Day celebrations will now be week-long from January 23-30 every year. The celebrations commenced on January 23, the birth anniversary of great freedom fighter Netaji Subhas Chandra Bose, and culminate on January, 30 which is observed as Martyrs' Day.

According to the Ministry of Defence, for the first time, an Indian Air Force (IAF) will show grand flypast by 75 aircraft or helicopters. A drone show by 1,000 indigenously developed drones has been planned for the 'Beating the Retreat' ceremony, along with projection mapping will be shown for the first time at the Republic day parade. For the first time, 480 dancers who will perform during the cultural programme at the parade have been selected through a nationwide Vande Bharatam dance competition.

The main parade for the first time will also see the launch of 'Shaheedon Ko Shat Shat Naman' programme by National Cadet and a display of ten scrolls each of 75 metres prepared during the 'Kala Kumbh' event and installation of 10 large LED screens for a better viewing experience of spectators. Republic Day Parade 2022 All Set To Showcase India’s Military Might & Cultural Diversity At Rajpath As Country Celebrates Its 73rd Gantantra Diwas.

The parade at Rajpath will start at 10:30 am, instead of the earlier timing of 10 am to provide better visibility to the parade and flypast. Special arrangements have been made keeping in view the current COVID-19 situation. The number of seats for spectators has been significantly reduced and people are being encouraged to register online to witness the live celebrations.

"Only double vaccinated adults/one dose vaccinated children of 15 years and above will be allowed entry at the parade. Children below 15 years of age will not be permitted," the statement reads.To watch the Republic Day Parade and at the 'Beating the Retreat' ceremony some sections of auto-rickshaw drivers, construction workers, safai karamcharis and frontline health workers will be invited.