Dam Safety Bill 2019 Passed in Rajya Sabha for Surveillance, Maintenance and Operation Of Dams Across India

It shall also perform the role of State Dam Safety Organisation to eliminate potential causes for inter-state conflicts. The bill also provides the constitution of a State Committee on Dam Safety by the state governments. 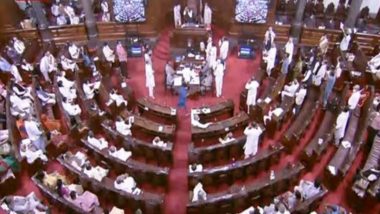 New Delhi, December 2: A bill providing for surveillance, inspection, operation, and maintenance of all specified dams across the country and for constituting the National Committee on Dam Safety was passed by the Rajya Sabha. The Dam Safety Bill, 2019 was passsed after a reply by Jal Shakti Minister Gajendra Singh Shekhawat. It was earlier passed by Lok Sabha.

In his reply to the debate, the minister said the bill incorporates suggestions of the standing committee. He sought to allay the apprehensions of opposition members that the bill encroaches on the powers of states.

The bill provides for the constitution of the National Committee on Dam Safety to prevent dam failure-related disasters and to maintain standards of dam safety. The committee will evolve dam safety policies and recommend necessary regulations as may be required. Assisted Reproductive Tech Bill 2020 Passed in Lok Sabha to Regulate IVF Clinics.

It provides for establishing National Dam Safety Authority as a regulatory body to implement the policy, guidelines and standards for proper surveillance, inspection and maintenance of specified dams and address unresolved points of issues between the State Dam Safety Organisation of two states, or between the SDSO of a state and the owner of a dam in that state.

It shall also perform the role of State Dam Safety Organisation to eliminate potential causes for inter-state conflicts. The bill also provides the constitution of a State Committee on Dam Safety by the state governments.

Every owner of a specified dam is required to establish operational and maintenance set up to ensure the continued safety of such dams and to carry out risk assessment studies at such intervals as specified by the National Committee on Dam Safety. Journalists Protest Against Restrictions on Entry of Media Persons into Parliament.

The concerned State Dam Safety Organisation is required to keep perpetual surveillance, carry out inspections and monitor the operation and maintenance of specified dams under its jurisdiction to ensure their safety and to classify each dam under their jurisdiction as per the vulnerability.