The front part of the tableau represents the freedom fighting spirit of tribals' ancestors. The rear portion relives the horrific moment of the massacre by British soldiers atop Jaramara Hills. 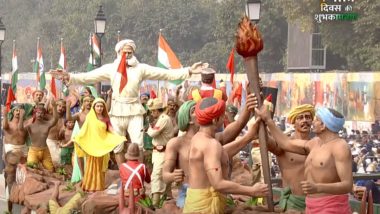 New Delhi, January 26: During the 73rd Republic Day parade at Rajpath in Delhi on Wednesday, Gujarat's tableau displayed the freedom movement of the tribals in 1922. Hundred years ago, on March 7, 1922, Bhil tribes from Pal and Dadhvav villages (Sabarkantha District, Gujarat) had gathered under the leadership of Shri Motilal Tejawat (from a merchant family of Koliyari village, who worked for the tribals' upliftment and was known as "Gandhi' among them).

On the fateful day when he was addressing thousands of tribals to protest against the land revenue system imposed by British and feudal lords, British officer Major H.G. Saturn from Mewad Bhil Corps ordered firing and 1200 innocent tribals were shot dead. Two wells were filled with the martyred tribals. This horrific incidentoccurred just three years after the Jallianwala Bagh incident, but was forgotten. Prime Minister Narendra Modi during his days as the Chief Minister of Gujarat brought it before the world.

The front part of the tableau represents the freedom fighting spirit of tribals' ancestors. The rear portion relives the horrific moment of the massacre by British soldiers atop Jaramara Hills. Republic Day 2022: PM Narendra Modi Pays Tributes at National War Memorial Ahead of R-Day Celebrations.

The tableau of Gujarat showcases the theme of the 'tribal movement of Gujarat'.

The front part of the tableau represents the freedom fighting spirits of tribals' ancestors. #RepublicDayIndia pic.twitter.com/4eAlARpjf9

Tribal artists in their traditional costumes are performing 'Ger' dance along with the folklore describing that event. Even today, they sing this folklore at auspicious occasions and recount the sacrifices made by their ancestors. The Republic Day, falling in the 75th year of Independence is being celebrated as 'Azadi Ka Amrit Mahotsav' across the country.

Republic Day celebrations commenced from January 23 with PM Modi on the occasion of Netaji's Subhas Chandra Bose 125th birth anniversary, unveiled the hologram statue of the freedom fighter at India Gate in the national capital. The week-long celebrations will culminate on January, 30 which is observed as Martyrs' Day.