Indian Rupee Rises 9 Paise to 79.24 Against US Dollar in Early Trade

At the interbank foreign exchange, the rupee opened at 79.29 against the American dollar. In initial trade, the local currency witnessed a high of 79.24 and a low of 79.31 against the US dollar. 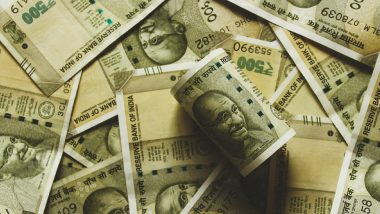 In the previous session, the rupee had closed at an all-time low of 79.33 against the US dollar. According to Sriram Iyer, Senior Research Analyst at Reliance Securities, the rupee opened higher this Wednesday tracking an overnight fall in crude oil prices. Gold Prices to Rise? Import Tax on Gold Increased by 5%.

"However, appreciation bias could remain capped and possibly the rupee could witness new lows against the dollar weighed down by fears of economic slowdown and worsening CAD (Current Account Deficit). "In fact, many traders and investors are forecasting a CAD upwards of 3 per cent of GDP in the ongoing financial year, up from 1.2 per cent last year," Iyer said.

The only thing which could arrest the rupee's fall could be a hawkish/aggressive stance of the Reserve Bank of India (RBI) in their upcoming meeting in August, Iyer noted. On the domestic equity front, the 30-share Sensex was trading 362.8 points or 0.68 per cent higher at 53,497.15 points while the broader NSE Nifty advanced 90 points or 0.57 per cent to 15,900.85 points. Rupee Falls 41 Paise To Close at All-Time Low of 79.36 Against US Dollar.

Meanwhile, the dollar index, which gauges the greenback's strength against a basket of six currencies, slipped 0.08 per cent to 106.45. Global oil benchmark Brent crude futures rose 1.14 per cent to USD 103.94 per barrel. Foreign institutional investors turned net buyers after a long gap in the capital market on Tuesday as they purchased shares worth Rs 1,295.84 crore, as per exchange data.