Four bar owners among seven people were arrested by the police after four people died and one lost his eyesight post consuming spurious liquor in Madhya Pradesh's Indore, said the police on Saturday. 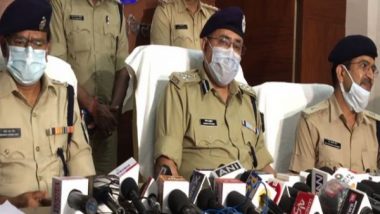 Indore, August 1: Four bar owners among seven people were arrested by the police after four people died and one lost his eyesight post consuming spurious liquor in Madhya Pradesh's Indore, said the police on Saturday.

According to the police, two more people who had taken ill after consuming the liquor are currently undergoing treatment.

Among the four killed, two died after consuming liquor at the Paradise Bar under the Aerodrome Police Station limits while two others died after consuming alcohol at the Sapna Bar of Banganga police station area. Madhya Pradesh Hooch Tragedy: 3 Dead After Consuming Spurious Liquor in Mandsaur.

Addressing a press conference, Indore SP West Mahesh Chandra Jain said, "Two persons named Sagar and Shishir on July 23 consumed liquor of the brand Royal Stag with their friends at the Paradise Bar which falls under the Aerodrome Police Station limits, which led to their death. During the investigation, it was revealed that the owner of the bar instead of purchasing liquor from a licensed store, bought illegal liquor from an outside agent at a cheaper price. The liquor was later found to be fake and poisonous during the investigation."

At the same time, two people named Sachin and Shivratan also drank Royal Stag liquor at Sapna Bar of Banganga police station area and both of them also died, said the police.

At the same time, in the Juni Indore Police Station area, a person identified as Tarun Rizwani had bought a bottle of Royal Stag at a subsidised rate from the market, said the police, adding that he lost his eyesight after consuming the liquor.

"The suppliers of this fake and poisonous liquor have also been nabbed by the police. During interrogation, they told the police that they had bought the liquor from Khandwa. Khargone Police has also taken action against those operating spurious liquor factories in Mortakka," said Jain.

Jain also said, "During the investigation, one of the suppliers of the illegal and poisonous liquor, Bunty alias Rahul was called to the police station for interrogation on Friday night. He had reached after consuming sulfas tablets.

As soon as the police came to know about this, he was sent to the hospital but he had died by then."

According to the police, Bunty alias Rahul used to bring liquor from Khandwa district and supply it to Indore.

Indore Deputy Inspector General of Police (DIG) Manish Kapuria said, "Police have registered a case of culpable homicide against both the bar owners in the case of selling spurious liquor in the name of Royal Stag and have arrested the accused.These spurious liquor came from the Mortakka and Mandhata areas of the Khandwa district. A case has also been registered against the suppliers of this spurious liquor"