A Samajwadi Party delegation met district magistrate Adarsh Singh and handed over a memorandum addressed to Governor Anandiben Patel in this regard and also demanded registering of a case against the officials responsible for it. 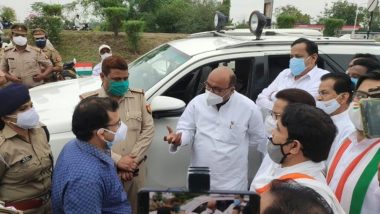 Congress delegation on its way to see the mosque that was razed in Ram Sanehi Ghat, was stopped by the police. (Photo Credits: IANS)

Barabanki, May 20: Opposition Samajwadi Party and Congress on Thursday strongly condemned the pulling down of a mosque in Uttar Pradesh's Ram Sanehighat tehsil by the administration of Barabanki district and demanded a judicial probe into the incident and suspension of the officials concerned.

The Barabanki administration had on Monday night pulled down the mosque, saying the construction was illegal and demolished on court orders. The All-India Muslim Law Board (AIMPLB) and the UP Sunni Central Waqf Board have demanded a judicial probe into the demolition.

A Samajwadi Party delegation met district magistrate Adarsh Singh and handed over a memorandum addressed to Governor Anandiben Patel in this regard and also demanded registering of a case against the officials responsible for it.

Member of the Legislative Council Raju Yadav, who was in the delegation, said that the memorandum "strongly condemned the unauthorised demolition of the 100-year-old mosque located in Sumerganj town of Ram Sanehi Ghat which is also registered as the property of the Sunni Waqf Board" and claimed that neither a notice was given to the Waqf Board nor was it made a party before the action to demolish it.

Joint magistrate Divyanshu Patel had termed the construction as illegal and said the building was brought down on court orders. Meanwhile, a Congress delegation which was on its way for inspection of the site of the mosque claimed it was stopped by the police and administrative officials. All the partymen were later made to return back, state Congress chief Ajay Kumar Lallu, who was leading the delegation, said.

"We demand that action should be taken against the officials working against the law and harming the sentiments of the people and lodging of a criminal case against them besides a judicial probe by a sitting high court judge and the reconstruction of the mosque," he added.