"The bubbles popping up in the sky are shouting loud and saying Dev Deepawali 2021 is here. Experience the joy of flying high in Varanasi Balloon Festival," tweeted the official Twitter handle of the Department of Tourism, Government of Uttar Pradesh. 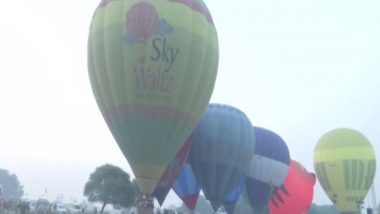 Varanasi, November 19: In a bid to boost tourism in Uttar Pradesh, a three-day hot air balloon festival, has been organised by the State Tourism Department, that began on Wednesday in Varanasi on the occasion of Dev Deepawali 2021. The ongoing festival which is taking place on the banks of the Ganga river near Domri raj Ghat commenced on November 17 and will go on till November 19.

"The bubbles popping up in the sky are shouting loud and saying Dev Deepawali 2021 is here. Experience the joy of flying high in Varanasi Balloon Festival," tweeted the official Twitter handle of the Department of Tourism, Government of Uttar Pradesh.

People from Kashi started visiting the site early in the morning on Thursday to experience a new adventure and see the entire city of Varanasi from 1000 ft above the land.

"It felt really good as I got the opportunity to witness the entire Varanasi from the sky. Looking at river Ganga and the river banks from such heights is a different feeling altogether. Varanasi is beautiful. It looks way different from air than as it looks from the ground," said one of the visitor. Apart from locals, people from all over the country are visiting the site of the event which is taking place for the first time in Varanasi. Dev Deepawali 2021: Know Date, Puja Shubh Muhurat, Significance and Celebrations Related to ‘Diwali of the Gods’.

"This is happening for the first time in Varanasi. We have come from far to experience this adventure," said Mansha Pandey. "It is 6 o'clock in the morning and as you can see people are standing all around in the queue. People are excited as they take photos of these balloons flying the sky, something they have not witnessed earlier," said Santosh Das, a visitor.

"I wish the number of ballons and days gets increased as more and more people will be able to enjoy this," added Renika, another visitor. As per officials, eleven pilots have come to Varanasi from Poland to fly the balloons. Security arrangements are being taken care of by the police and Provincial Armed Constabulary (PAC) personnel of Ramnagar police station. Fire brigade officials are also present at the spot.