Criticizing the Central government for giving Jharkhand the 19th rank in the administration of COVID vaccines, health minister Banna Gupta on Tuesday said the state is solely dependent on the Centre for the supply of doses. 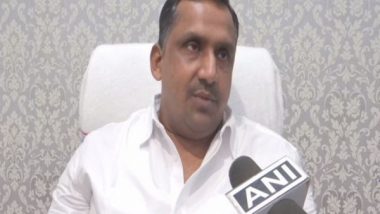 Ranchi, June 23: Criticizing the Central government for giving Jharkhand the 19th rank in the administration of COVID vaccines, health minister Banna Gupta on Tuesday said the state is solely dependent on the Centre for the supply of doses.

He further attacked the Centre, asking "Where is the money that has been collected through petrol and diesel taxes?"

While addressing reporters, Gupta argued that Jharkhand is a poor state that does not manufacture vaccines and said that vaccines wastage was only at 4 per cent, relatively lower compared to other larger states. Healthcare Workers on Visit for COVID-19 Vaccination Awareness Attacked in Jharkhand Village.

"Jharkhand is not the vaccine manufacturing state. We depend on the central government. If the centre doesn't provide vaccines what shall we do? I had written to Union Health Minister Harsh Vardhan reminding him to release Rs 35,000 crore allocated in the budget to the state for vaccines," he said.

He further said, "Where is Rs 20 lakh crore that was promised? They are spreading misinformation, saying that Jharkhand is wasting vaccines. You (centre) haven't given us the vaccines and are talking about the wastage. Our wastage is only 4 per cent. Being a poor state we know the importance of vaccine doses. We do not waste the vaccines, we make better use of them. It is the bigger states where wastage is high."

Speaking about the declaration of Mucormycosis, also known as black fungus, as an epidemic in the state, the health minister said that this had been done so that the state can keep records and provide better treatment.

"We have declared black fungus an epidemic. A few cases were reported in patients that have diabetes or cancer. We have declared it an epidemic so that we can keep all records, provide treatment to patients, and take serious actions against it. We prescribed the medicines and are taking all precautions as per ICMR guidelines," he said.