A vegetarian woman has approached the consumer court complaining that an American pizza restaurant chain outlet delivered her a non-vegetarian pizza and has sought compensation of Rs one crore from the restaurant chain. 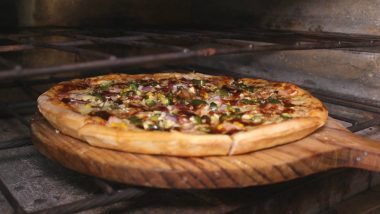 New Delhi, March 13: A vegetarian woman has approached the consumer court complaining that an American pizza restaurant chain outlet delivered her a non-vegetarian pizza and has sought compensation of Rs one crore from the restaurant chain.

Deepali Tyagi, in her petition, has claimed that she is a pure vegetarian because of her "religious beliefs, teachings, family traditions, own conscience, and her best choice". Pizza Delivery Boy Spits on Food Before Delivery in Turkey, Faces 18 Years of Jail (Watch Video).

On March 21, 2019, Deepali placed an order for a vegetarian pizza from the pizza outlet at her residence at Ghaziabad in Uttar Pradesh. That day it was the occasion of Holi and the complainant and their children were hungry after celebrating the festival. She further said that the pizza was delivered late as opposed to 30 minutes delivery time frame given by the company. However, she chose to ignore the same and took a bite of the pizza. It was at that moment they realised that it was a non-vegetarian pizza and there were pieces of meat instead of mushroom, the complainant said in her complaint.

Her lawyer Farhat Warsi told the consumer court that Deepali immediately called customer care and raised a complaint on their "gross" negligence and delivering a non-veg pizza in a house of pure vegetarians.

Then on March 26, 2019, a person who referred to himself as the district manager of the pizza outlet, made a call to the complainant and gave an offer of serving pizzas to the whole family of the complainants at the outlet free of cost. However, the complainant told him again that this is not a simple case, as they are assuming it since the (opposite party) has spoiled the religious practices of the complainant and gave her a permanent mental agony, she would have to go through "several long and expensive rituals" which will cost her lakhs of rupees during her entire life.

At this, the district manager of the pizza outlet replied that since he is not authorised to negotiate in terms of money, he would hand over the matter to their own legal team, the complaint copy reads.

She said that the nature of the response from the opposite party was "very casual", an offer of serving pizza free of cost was nothing but a "mockery an insult to the social and financial status" of the complainant.

"That the opposite party's negligent manner of performance has contaminated complainant body with food mixed with animal meat that was acquired by killing and cutting short the life given by God to any animal. In her religious belief killing any animal and eating its meat is a "paap" (sin). The opposite party has a deceitfully involved complainant in that sin of eating animal meat. They have wounded her soul giving her mental agony for her whole life. They have ravaged her religious belief," the petition said.

A Delhi District Consumer Disputes Redressal Commission has asked the pizza outlet to file a reply to the woman's complaint and has listed the matter for further hearing on March 17.