recently visited Chile to attend the International Poetry Festival of Santiago from May 2-5 where he was an invited guest poet among 100 poets from over 20 countries including Germany, Spain, France, China, Australia and USA. 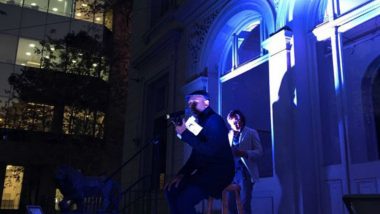 Santiago, May 9: Indian poet-diplomat Abhay K. recently visited Chile to attend the International Poetry Festival of Santiago from May 2-5 where he was an invited guest poet among 100 poets from over 20 countries including Germany, Spain, France, China, Australia and USA. During the poetry festival in Santiago, he was invited to read with Raul Zurita, one of the finest contemporary poets of Chile, who had words of praise for Abhay's poems on Chilean poets Gabriela Mistral, Pablo Neruda and Nicanor Parra.

He also visited the three houses of poet-diplomat Pablo Neruda in Santiago, Valparaiso and Isla Negra. Sharing his experiences of the visit Abhay K. said, "Visiting Chile has been a long time dream for me, especially Isla Negra where Neruda spent his final years, as a poet, as a diplomat and as a human being who deeply cared about our world. Neruda has been a big inspiration for me and I was drawn to Latin America because of him and Octavio Paz. Now I have visited Isla Negra, I'm a happy man."

During the past two and half years of his stay in Brazil, the Indian poet-diplomat has been busy creating literary bridges between India and Latin America. He read his poems in Peru, Argentina, Nicaragua, Colombia, Brazil and Chile between 2016 and 2018. Earlier this year in February the Portuguese edition of 100 Great Indian Poems edited by him was published by the University of Sao Paulo. Its Spanish edition will be published by the Autonomous University of Nuevo Leon in Monterrey, Mexico in October this year.

His bilingual (English-Portuguese) poetry collection based-on Brasilia titled The Prophecy of Brasilia will be published this year and his collection of poems on Latin America titled The Alphabets of Latin America is due for 2019. He has also translated Brazilian poetry into English and 100 Select Brazilian Poems edited and translated by him is likely to be published soon.