As per Variety, Neon, the studio behind 'Parasite', will co-finance and executive produce the film alongside Topic Studios, which previously produced Leave No Trace and Luce. 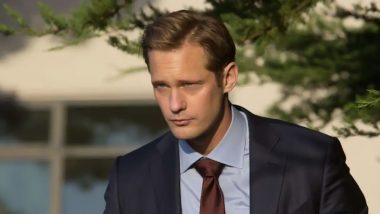 Actor Alexander Skarsgard is all set to star in Brandon Cronenberg's Infinity Pool, a sci-fi thriller. As per Variety, Neon, the studio behind 'Parasite', will co-finance and executive produce the film alongside Topic Studios, which previously produced Leave No Trace and Luce. 'Infinity Pool' comes on the heels of Skarsgard's powerful performance in 'Godzilla vs. Kong', one of the few box office success stories of the pandemic era. Cronenberg had recently directed the trippy horror film, 'Possessor', which Neon released. Tehran Season 2: Glenn Close Joins Apple TV+ Thriller Israeli Series From the Writers of Fauda.

The sci-fi thriller will follow James and Em, a young couple who are rich, in love, and on vacation that takes a twist. The official logline for 'Infinity Pool' reads, "James and Em are young, rich, in love, and on vacation. Their all-inclusive resort boasts island tours and gleaming beaches. But outside of the hotel gates waits something much more dangerous and seductive, beyond the edge of paradise." Given Cronenberg's out-there oeuvre, that "something" probably doesn't involve lost travelers' checks or a failure to apply sufficient sunscreen. Suddenly: Jake Gyllenhaal, Vanessa Kirby to Headline Thomas Bidegain’s Survival Thriller.

Panahi brokered the deal between Neon and the producers. Neon will release 'Infinity Pool' in the US and Elevation Pictures will release the film in Canada. Meanwhile, Skarsgard recently earned an Emmy for playing an abusive husband on HBO's acclaimed TV series 'Big Little Lies'. He will next be seen in Robert Eggers' 'The Northman' opposite Nicole Kidman, Anya Taylor-Joy and Willem Dafoe, as well as the upcoming season of 'Succession', HBO's buzzy look at a media dynasty. (ANI)