On May 23, 2016, Heard filed for divorce from Depp and obtained a temporary restraining order against the Oscar-nominated actor. She alleged that Depp had physically abused her during their relationship, and said it was usually while under the influence of drugs or alcohol. 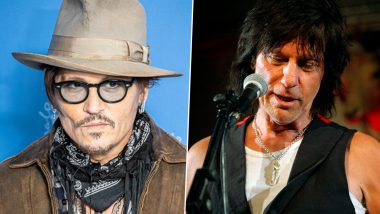 Popular American actor Johnny Depp who won the legal battle of defamation against his ex-wife, Amber Heard, on Wednesday, has sprung back to action, collaborating with guitar legend Jeff Beck for a musical turn for his next career move. According to Deadline, Jeff had revealed that he and his best pal Johnny, would be releasing an album together in the following month. Previously both Depp and Jeff had collaborated on the cover of the song 'Isolation' by John Lenon. Amber Heard’s Lawyer Says Actress Can’t Pay USD 10 Million in Damages to Johnny Depp Following the Defamation Trial.

Just one night after making a surprise appearance during Jeff Beck's show, Hollywood star Johnny Depp joined the guitar legend onstage again, this time at London's iconic Royal Albert Hall. Addressing the crowd, Jeff, mentioning Johnny had said that "I met this guy five years ago and we've never stopped laughing since. We actually made an album. I don't know how it happened. It will be out in July."

The duo were also spotted at a pub in Newcastle after Johnny's victory.Musician Sam Fender also joined them, reported Deadline. On Wednesday, Johnny won a high-profile defamation case between him and his ex-wife, Amber Heard. The jury has awarded Johnny Depp USD 15 million in damages.Amber Heard has also won part of her libel case against Johnny Depp over articles in a privately owned newspaper, in which Johnny Depp's former lawyer described her claims of domestic abuse as a hoax. Johnny Depp’s Possible Pirates Of The Caribbean Return on Cards, Reveals Ex Disney Executive After Amber Heard Verdict: Reports.

The jury has awarded Amber Heard USD 2 million in damages. After several years of dating, Depp and Heard married in a very private ceremony in their home in Los Angeles in 2015. On May 23, 2016, Heard filed for divorce from Depp and obtained a temporary restraining order against the Oscar-nominated actor. She alleged that Depp had physically abused her during their relationship, and said it was usually while under the influence of drugs or alcohol.