American actor Julia Louis-Dreyfus has joined Jonah Hill and Eddie Murphy in the untitled comedy film that Kenya Barris will direct for Netflix. 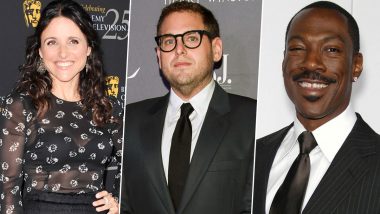 American actor Julia Louis-Dreyfus has joined Jonah Hill and Eddie Murphy in the untitled comedy film that Kenya Barris will direct for Netflix. As per The Hollywood Reporter, Hill and Barris co-wrote the script and are producing via the latter's Khalabo Ink Society banner, with Hill through his Strong Baby shingle. Also producing is Kevin Misher of Misher Films. Masaba Gupta Wraps Up the Shoot of Her Netflix Show Masaba Masaba Season 2.

Plot details are being kept under wraps, but it is said to be an incisive examination of modern love and family dynamics and how clashing cultures, societal expectations and generational differences shape and affect relationships. Murphy and Hill will find themselves on opposite sides of some of those divides. Louis-Dreyfus will play Hill's mother. Sidharth Malhotra to Attend Shershaah’s Special Screening at First Himalayan Film Festival.

Barris is making his feature directorial debut with the project, which is being executive produced by Mychelle Deschamps and Hale Rothstein for Khalabo Ink Society, Strong Baby's Matt Dines and Ali Goodwin, and Andy Berman of Misher Films. Also, executive producing are David Hyman and Charisse Hewitt-Webster. Louis-Dreyfus, who won nine Emmys for her work on HBO's political comedy 'Veep', has been stealing scenes as a spymaster in Marvel's 'Black Widow' and 'The Falcon and the Winter Soldier', and also voiced a character in Disney's 'Onward'. She also starred opposite Will Ferrell in 2020's 'Downhill'.