American reality TV star Kim Kardashian recently revealed that her whole family was diagnosed with COVID-19, which halted the production of 'Keeping Up With The Kardashians' for two weeks and also disrupted her preparation for her second crack at the baby bar exam. 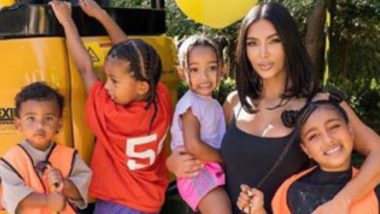 American reality TV star Kim Kardashian recently revealed that her whole family was diagnosed with COVID-19, which halted the production of 'Keeping Up With The Kardashians' for two weeks and also disrupted her preparation for her second crack at the baby bar exam. According to earlier reports, a teaser for the last episode of Keeping Up with the Kardashians had already revealed that Kim and her estranged husband Kanye West's 5-year-old son Saint was diagnosed with COVID-19; but TMZ has learnt that on Thursday night's episode, the SKIMS founder made a huge revelation saying that the health crisis went far beyond her oldest son, and affected her whole family. Kim Kardashian Denies Violating California Labour Laws As Her Ex-Staff Members Sue Her.

Kim told Saint tested positive after he started going to school, and that she was really worried about him because he was crying and coughing a lot. With three other kids in the house, she was concerned about the deadly virus spreading further. Soon after, North also started feeling sick, and eventually both she and Kim discovered they had COVID too. Following this, the producers of 'KUWTK' decided to shut down the shooting for 14 days while the family quarantined. Aubrey O’Day Once Claimed That Kim Kardashian and Travis Barker Hooked Up Before Kourtney.

Kim disclosed that she had some severe symptoms of the infection, like a 104-degree fever and that made her unable to study for her baby bar exam- which TMZ reported, she had previously flunked. Although the fam had recovered from the disease, it is still unclear when did COVID-19 hit Kim and her kids as the E! reality show is filmed months in advance. On a related note, Kim's sister Khloe Kardashian and ex-husband Kanye West were also diagnosed with COVID-19 earlier.

At that time, Kim described her fear of the deadly disease to an outlet saying that "Kanye had its way at the beginning when nobody really knew what was going on. It was so scary and unknown. I had my four babies and no one else in the house to help. It was a challenge because it was so unknown." Kim and Kanye parted ways in February after nearly seven years of marriage. The insider also said that Kanye meets his kids whenever he wants, but not in the house.

Kanye and Kim have been living apart for some time now. While Kanye has been at his ranch in Wyoming, the 'Keeping up with the Kardashians' star is staying at their family home near Calabasas, California. The celebrity couple, who made their relationship public in April 2012, has four children, North West, Saint West, Chicago West and Psalm West.