Last month, Micromax had announced its new 'In' sub-brand and said it was looking at investing Rs 500 crore over the next 12-18 months towards R&D, marketing and sprucing up manufacturing. 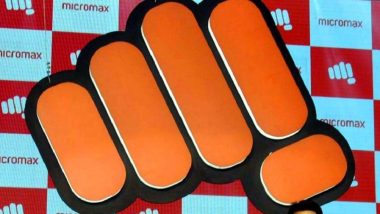 New Delhi, November 3: Homegrown phone company Micromax on Tuesday said it expects 10 per cent of the sales volume of its newly-launched 'In' smartphones to come from its own online platform by the end of this fiscal.

Micromax -- which launched two devices under its 'In' brand on Tuesday -- said it will bring in products across various price points as it looks to make a comeback in the hypercompetitive Indian smartphone market. Also Read | Huawei Nova 8 SE Launch on November 5, 2020; Expected Prices, Features, Variants & Specifications.

"We have started our e-commerce platform (micromaxinfo.com) with the launch of 'In' today and will be looking at building the platform. "The intent is to drive at least 10 per cent of the overall volumes from this platform by the end this financial year," Micromax co-founder Rahul Sharma told PTI.

He added that the company will add new devices to its portfolio across various price points to cater to different segments of consumers. Online platforms, including e-commerce firms like Flipkart and Amazon, have emerged as strong distribution channels for smartphone brands, with digital mode accounting for 30-40 per cent of sales.

"The customers will be the judge of our products and what our position in the market is. We are here for the long haul and we will continue to bring performance oriented products at disruptive pricing," Sharma added.

Last month, Micromax had announced its new 'In' sub-brand and said it was looking at investing Rs 500 crore over the next 12-18 months towards R&D, marketing and sprucing up manufacturing.

Once a market leader, Micromax lost its position to players like Xiaomi, Oppo and Vivo as these Chinese giants captured the Indian market with their aggressively-priced smartphones and massive marketing spends.

According to Counterpoint Research, the smartphone segment in India rebounded after the lockdown to touch an all-time high of 53 million units in the September quarter (up 9 per cent year-on-year), with Samsung toppling Xiaomi from the number one spot.

Samsung led the smartphone market with 24 per cent share, followed by Xiaomi (23 per cent), Vivo (16 per cent), Realme (15 per cent) and Oppo (10 per cent). Micromax on Tuesday launched 'IN note 1' and 'IN 1b' in the mid-range and budget segments, respectively. With a focus on high performance, the new smartphones feature MediaTek G Series chipsets and offer pure Android OS experience.

The IN note 1 is priced at Rs 10,999 onwards, while the IN 1b will be available from Rs 6,999. The devices will go on sale later this month on Flipkart and micromaxinfo.com, followed by retail channels across the country.

"These 'Made in India' smartphones offer the best-in-segment specifications...These offer pure Android OS experience with no bloatware or advertisements, and there will be guaranteed security patches and updates for two years. "We will continue to raise the bar higher for both design and technology to address the requirements of our customers," Sharma said.