Under the terms of the definitive agreements, the statement said SPNI will have a cash balance of USD 1.5 billion at closing, including through infusion by the current shareholders of SPNI and the promoter founders of ZEEL 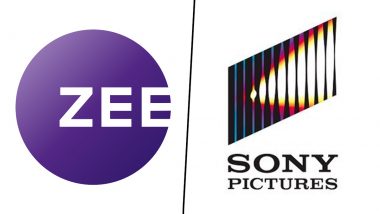 New Delhi, Dec 22: Sony Pictures Networks India Pvt Ltd (SPNI) and Zee Entertainment Enterprises Ltd (ZEEL) on Wednesday said they have signed definitive agreements for their merger following conclusion of an exclusive negotiation period during which both parties conducted mutual due diligence. ZEE5 Enters into Partnership With Applause Entertainment for a Multi-Show Association

In a joint statement, the two companies said they have "signed definitive agreements to merge ZEEL with and into SPNI and combine their linear networks, digital assets, production operations and program libraries".

The agreements follow the conclusion of an exclusive negotiation period during which ZEEL and SPNI conducted mutual due diligence, it added.

When the merger deal was announced in September, the two networks had stated that Sony would invest USD 1.575 billion and hold 52.93 per cent stake in the merged entity and Zee the remaining 47.07 per cent.

Under the terms of the definitive agreements, the statement said SPNI will have a cash balance of USD 1.5 billion at closing, including through infusion by the current shareholders of SPNI and the promoter founders of ZEEL.

This is aimed at enabling the combined company "to drive sharper content creation across platforms, strengthen its footprint in the rapidly evolving digital ecosystem, bid for media rights in the fast-growing sports landscape and pursue other growth opportunities", it added.

After closing, the new combined company will be publicly listed in India. The closing of the transaction is subject to certain customary closing conditions, including regulatory, shareholder, and third-party approvals, the statement said.

As part of the agreement, Sony Pictures Entertainment Inc (SPE) will pay a non-compete fee to certain promoter founders of ZEEL, which will be used by them to infuse primary equity capital into SPNI. This would entitle them to acquire shares of SPNI, which would eventually equal approximately 2.11 per cent of the shares of the combined company on a post-closing basis.

The payment of non-compete fee by Sony Pictures Entertainment Inc, of which SPNI is an indirect subsidiary, will be through a subsidiary, the statement said.

"After the closing, SPE will indirectly hold a majority 50.86 per cent of the combined company, the promoters (founders) of ZEEL will hold 3.99 per cent, and the other ZEEL shareholders will hold a 45.15 per cent stake," it added.

SPE Chairman of Global Television Studios and SPE Corporate Development, Ravi Ahuja said, "Today marks an important step in our efforts to bring together some of the strongest leadership teams, content creators, and film libraries in the media business to create extraordinary entertainment and value for Indian consumers."

SPNI MD and CEO, NP Singh, said the merger will create a company that's "best in class and will redefine the contours of the media and entertainment industry".

Goenka said, "The combined company will create a comprehensive entertainment business, enabling us to serve our consumers with wider content choices across platforms...This merger presents a significant opportunity to jointly take the businesses to the next level and drive substantial growth in the global arena."

The two entities have been pressing for an EGM of ZEEL to discuss various issues, including the removal of Goenka and are currently locked in legal battles.