A prime accused in the 1993 Mumbai serial blasts, who is a close associate of the terror attack's key conspirator Tiger Memon, was arrested from the airport in Maharashtra's capital by the Gujarat ATS in a drug seizure case, a senior official said on Monday. 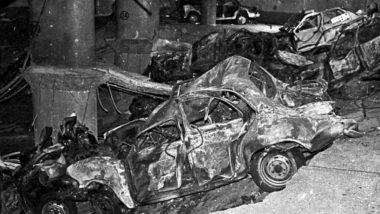 Ahmedabad, February 10: A prime accused in the 1993 Mumbai serial blasts, who is a close associate of the terror attack's key conspirator Tiger Memon, was arrested from the airport in Maharashtra's capital by the Gujarat ATS in a drug seizure case, a senior official said on Monday.

Munaf Halari was arrested from the Mumbai international airport on late Sunday night by a team of the Gujarat Anti-Terrorist Squad (ATS), he said.

Halari is wanted in the 1993 Mumbai serial bomb blasts in which around 260 people were killed and more than 700 injured in what was one of the worst terror attacks in India. Halari was on the radar of the Gujarat ATS following the arrest of five Pakistani nationals in January off the Gujarat coast with drugs worth Rs 175 crore, he said.

The questioning of the Pakistani nationals had revealed the role of Halari in drug smuggling, the ACP told reporters at Gujarat ATS headquarters here. "Munaf Halari is also a prime accused in the Mumbai serial blasts case of 1993 in which a Red Corner Notice had been issued against him. He had played a vital role in the serial blasts. "Halari is a close associate of Tiger Memon, one of the main conspirators of the serial blasts (Memon is yet to be arrested)," said Patel.

"Munaf Halari had procured three brand new scooters which were laden with explosives, of which one was parked at Zaveri Bazar (one of the blast sites in Mumbai). "After the blasts, he first fled to Bangkok. Tiger Memon got a Pakistani passport prepared for Halari with the help of Pakistani authorities. His Pakistani passport is in the name of Anwar Muhammad," said the Gujarat ATS officer.

Though a RCN had been issued against him, Halari entered India two times on Pakistani passport after going into hiding in 1993, he said. A Red Corner Notice is a kind of international arrest warrant for fugitives where Interpol requests its member countries to arrest or detain them, Patel said.

Halari last entered India in 2014 from Pakistan through the Wagah-Attari border in Punjab and visited Mumbai, from where he hails, he said. The Gujarat ATS has seized his Pakistani passport, which was renewed two times by authorities in the neighbouring country, said Patel.

"With the help of Tiger Memon, Halari then settled in Nairobi, the capital Kenya where he started a business under his new identity of a Pakistani National. "On instructions of Tiger Memon, he entered into the business of export-import of foodgrains. However, his main intention behind starting this business was to smuggle explosives and contraband into India," said the ATS officer.

The interrogation of the five Pakistani nationals arrested in January with drugs had revealed the consignment belonged to one Haji Hasan of Karachi, who was in touch with Halari, Patel said. Hasan had even promised to smuggle explosives into Gujarat through the coast, said Patel. The accused will be produced before a court for remand, he said.