Rishabh Pant Needs to Accept That He is Going Through a Rough Patch, Says Ajinkya Rahane

Rishabh Pant needs to accept that he is going through a rough patch and remain focussed on improving as a cricketer, said India vice-captain Ajinkya Rahane here on Thursday. 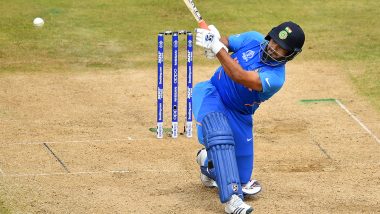 Wellington, February 20: Rishabh Pant needs to accept that he is going through a rough patch and remain focussed on improving as a cricketer, said India vice-captain Ajinkya Rahane here on Thursday.

The 22-year-old Pant, who till five months ago was India's first choice wicketkeeper-batsman across formats, has lost his spot in limited overs cricket to KL Rahul and red ball place to a much accomplished Wriddhiman Saha.

For Rahane, who too has also endured rough end of the stick as far selection matters go, had a word of advice for his young colleague.

"It's important to accept whatever you are going through. Be positive, try and learn as many things as possible from any of the players. Not saying it has to be senior or junior," Rahane said on the eve of the first Test against New Zealand.

Asked how one can internalize rejection or failure, Rahane said introspection becomes key and that starts with acceptance.

"See no one likes to sit outside but whatever your team needs on a particular game, you have got to accept that. I think acceptance is really important talking about that particular individual. Focus on controllables, keeping working hard and improve as a cricketer."

Rahane, who was dropped from the Test playing XI during the 2018 tour of South Africa, wants Pant to visualise that an opportunity could come his way anytime.

"You should try and focus on what he can control as player and keep visualizing that you will get an opportunity. You know what your role is. For Rishabh, he bats at No 6 or 7, so keep visualising about what if he gets an opportunity and what his role is. Keep it simple," said Rahane.