Sanya Malhotra on Netflix Film Pagglait: I Used to Write a Lot to Prep Up For My Role of Sandhya

Actor Sanya Malhotra says she wrote a journal to understand her character Sandhya's complex feelings in Pagglait, a film that revolves around a woman in a loveless marriage to a man who dies months after their wedding. 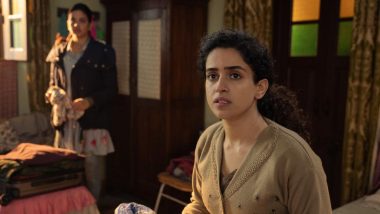 Actor Sanya Malhotra says she wrote a journal to understand her character Sandhya's complex feelings in Pagglait, a film that revolves around a woman in a loveless marriage to a man who dies months after their wedding. Sandhya, who is struggling to mourn Astik's passing, soon discovers that her husband was in a relationship with his colleague Akansha, played by Sayani Gupta, before they got married. Pagglait Title Track: Sanya Malhotra Is Crazy And Wild In This Funky Arijit Singh Track (Watch Video).

Malhotra, knwon for her roles in Dangal, Photograph and Ludo, said she wrote several pages to figure out the inner voice of her character, an educated middle class woman who sets onto a path of self-discovery while navigating her joint family and a Rs 50 lakh insurance policy that her late husband left in her name. Pagglait Trailer: Sanya Malhotra Plays a Young Widow Who Can’t Grieve in Netflix’s Slice of Life Comedy.

"I used to write a lot as my character Sandhya when I was prepping for this film. How silence eats her up at the end of one month after marriage... Maybe after two months, she would fun with other family members in the afternoon, but would feel suffocated in the evening when Astik would come home," the 29-year-old actor told PTI in a Zoom interview.

In her subconscious mind, Malhotra said, Sandhya knows she is not happy in this house. "Astik didn't give her any attention and she also didn't notice him. The happiness she was expecting from the person is no more. So now, she has to find that happiness inside her," the star said. The film, directed and penned by Umesh Bist, boasts of interesting characters, she added.

"It was easy for Sandhya to be angry and spiteful with Akanksha. But that didn't happen because both the characters and the film have been created in a mature manner. These are two are very emotionally mature characters," Delhi-born Malhotra said. During the course of the film, Sandhya is inspired by Akansha, who drives a car, lives independently, is a working woman, and is well groomed.

"Eventually, she comes to understand why Astik loved Akansha. She is a beautiful person inside out." The actor said her character taught her to let go of negativity and take control of her life. "So many of Sandhya's dreams remained unfulfilled because she let someone else make decisions on her behalf. Now she has to take on reins of her life... You have to be emotionally mature to let go of your grudge and hatred towards someone to move on. That's what she taught me," Malhotra said.