Using an innovative technique, new research by an international research team led by Niels de Winter (VUB-AMGC and Utrecht University) shows for the first time that dinosaurs had to deal with greater seasonal differences than previously thought. 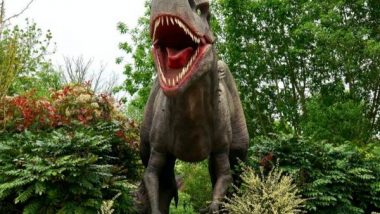 Washington, June 11: Palaeoclimatologists study climate of the geological past. Using an innovative technique, new research by an international research team led by Niels de Winter (VUB-AMGC and Utrecht University) shows for the first time that dinosaurs had to deal with greater seasonal differences than previously thought.

To better characterize the climate during this period of high CO2 concentration, the researchers used very well-preserved fossils of molluscs that lived in southern Sweden during the Cretaceous period, about 78 million years ago.

Those shells grew in the warm, shallow seas that covered much of Europe at the time. They recorded monthly variations in their environment and climate, like the rings in a tree. For their research, de Winter and the team used the "clumped isotope" method for the first time, in combination with a method developed by Niels de Winter.

About ten years ago, the 'clumped isotope' method was developed, which does not depend on the chemistry of the seawater and allows accurate reconstructions. But the clumped isotope method has a disadvantage: it requires so much carbonate that temperature reconstructions at a more detailed level, such as seasonal fluctuations based on shells, were not possible.

De Winter has now developed an innovative method in which measurements of much smaller quantities of carbonate are cleverly combined for temperature reconstructions. The clumped isotope method thus requires much less material and can therefore be used for research on fossil shells, which, like tree rings, hold a great deal of information about their living conditions.

The method also allows carbonate from successive summers (and winters) to be aggregated for better reconstruction of seasonal temperatures. For example, Winter found that water temperatures in Sweden during the Cretaceous "greenhouse period" fluctuated between 15°C and 27°C, over 10°C warmer than today.

The team also worked with scientists from the University of Bristol (UK) who develop climate models to compare the results with climate simulations of the Cretaceous period. Whereas previous climate reconstructions of the Cretaceous often came out colder than these models, the new results agree very well with the Bristol models. This shows that variations in seasons and water chemistry are very important in climate reconstructions:

It was thought that during the age of the dinosaurs difference between the seasons was small. We have now established that there were greater seasonal differences. With the same temperature average over a year, you end up with a much higher temperature in the summer.

De Winter: "Our results, therefore, suggest that in the mid-latitudes, seasonal temperatures will likely rise along with climate warming, while the seasonal difference is maintained. This results in very high summer temperatures. The results bring new insight into the dynamics of a warm climate on a very fine scale, which can be used to improve both climate reconstructions and climate predictions. Moreover, they show that a warmer climate can also have extreme seasons."

The development has far-reaching implications for the way climate reconstructions are done. It allows researchers to determine both the effect of seawater chemistry and the differences between summer and winter, thus verifying the accuracy of decades of temperature reconstructions. For his groundbreaking research, De Winter has been nominated for both the annual EOS Pipette Prize and New Scientist Science Talent 2021.

The study by de Winter and colleagues appeared in the journal Communications in Earth and Environment.