Get latest articles and stories on Sports at LatestLY. The 2018 World Championships bronze medallists Simranjit lived up to favourite's tag with a dominating start in the tournament. 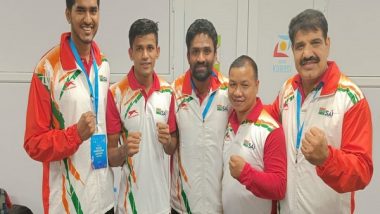 Nur-Sultan [Kazakhstan], June 29 (ANI): Indian boxers Simranjit Kaur and Ananta Chopade kickstarted their campaigns with contrasting victories in the opening round at the inaugural edition of Elorda Cup in Nur-Sultan, Kazakhstan on Wednesday.

The 2018 World Championships bronze medallists Simranjit lived up to favourite's tag with a dominating start in the tournament. She pulled off a comprehensive win against the local boxer Ischanova Nazym by unanimous decision in the women's 60kg encounter.

Whereas, in the country's first bout of the day, Ananta dealt with a stiff challenge from the Mongolian pugilist Dorjnyambuu Ganbold. However, the Indian kept his cool during an intensely fought men's 54kg thriller and eventually managed to tilt the result in his favour by a narrow 3-2 verdict.

Simranjit and Ananta will now square off against China's Xu Zichun and Kazakhstan's Altynbek Nursultan respectively in their quarter-finals matches.

A 33-member Indian contingent, including 12 men, has been participating at the ongoing event with two teams featuring in the women's section. Apart from India, the tournament has also been witnessing the presence of pugilists from other top boxing nations such as Uzbekistan, hosts Kazakhstan, Cuba, China and Mongolia.

Later on Day 1, another Indian boxer Kirti, representing the second Indian women's team, will fight against Japan's Rinka Tanaka in the 60kg. The finals will be played on July 4. (ANI)