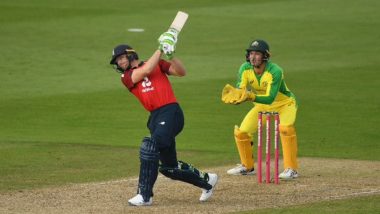 Malan scored an unbeaten 99 while Buttler smashed 67*, forming a 167-run partnership. With this victory, England won the three-match T20I series against South Africa by 3-0.

Chasing a huge target of 192 runs, England opener Jason Roy was sent back to the pavilion by Anrich Nortje in the fourth over. Buttler was then joined by Malan on the field.

Both played with an attacking mindset and smashed South Africa bowlers all around the park. Buttler and Malan completed their respective half-centuries as England looked in full control. Continuing their scintillating form, both keep the scoreboard running, taking England closer to the target.

Buttler and Malan's enthralling innings took the team over the line in the 18th over as England registered a nine-wicket win in the match with 14 balls to spare.

Earlier, after opting to bat first, South Africa got off to a decent start. Openers Quinton de Kock and Temba Bavuma formed a 34-run partnership before the former was dismissed by Chris Jordan. Reeza Hendricks then took the field but could not form a good partnership as Ben Stokes got hold of Bavuma (32) in the eighth over.

In his next over, Stokes removed Hendricks too, reducing South Africa to 64/3. Faf du Plessis and Rassie van der Dussen then came to rescue struggling South Africa. The duo played brilliantly and took the team over the 100-run mark in the 15th over.

Both dominated the England bowlers and scored their respective half-centuries. South Africa went past the 150-run mark in the 18th over. Du Plessis and Van der Dussen smashed 20 runs off the final over as South Africa put a total of 191 runs on the board.

Du Plessis and Van der Dussen formed a 127-run partnership which is the highest-ever fourth-wicket partnership for South Africa in T20Is.