Hamilton's other title was with McLaren in 2008. He sounded in tears when he spoke on the team radio moments after crossing the line in Istanbul. 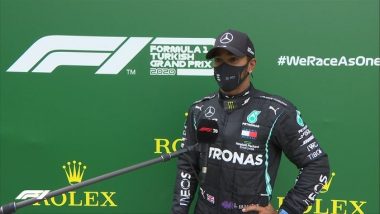 Istanbul, November 15: Lewis Hamilton clinched a record-equaling seventh Formula One title after winning a wet and gloomy Turkish Grand Prix for a record-extending 94th victory on Sunday. Hamilton now stands alongside F1 great Michael Schumacher on seven titles, having replaced the German great at Mercedes in 2013.

Hamilton only needed to finish ahead of his teammate Valtteri Bottas to seal his sixth title for Mercedes, and Bottas placed a lowly 14th after making a poor start. Hamilton's other title was with McLaren in 2008. He sounded in tears when he spoke on the team radio moments after crossing the line in Istanbul. Formula 1: Lance Stroll Takes Maiden Pole, Lewis Hamilton Sixth in Turkish GP.

"That's for all the kids out there who dream the impossible," Hamilton said. "You can do it." The British driver started from sixth place but took advantage of errors and poor tire strategies from other teams to win a fourth straight race and 10th of another hugely dominant season.

He placed about 30 seconds ahead of Racing Point's Sergio Perez and Ferrari's Sebastian Vettel, who overtook teammate Charles Leclerc for his first podium of a difficult season.