Kai Havertz scored a decisive penalty with three minutes of extra-time remaining to ensure Chelsea's triumph in the FIFA Club World Cup final by 2-1 against Palmeiras here in Abu Dhabi on Saturday night. 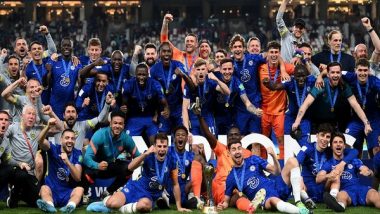 The decisive spot-kick was awarded for handball, the second such decision during this slow burner of a game in Abu Dhabi.

With this win, Blues can call themselves the champions of the world and have completed their full trophy collection. How to Watch Mumbai City FC vs Odisha FC, ISL 2021-22 Live Streaming Online on Disney+ Hotstar? Get Free Live Telecast of Indian Super League Match & Score Updates on TV.

Romelu Lukaku had cut a frustrated figure in the first half. Shortly into the second, however, Kai Havertz crossed from the left and the Belgian headed home from close range for his second goal of UAE 2021.

It was arguably the biggest game in Palmeiras's imperial history. The Palmeirenses were in Abu Dhabi en masse. They were 1-0 down. When they got a penalty, though, their number 23 didn't hesitate. Up Raphael Veiga duly stepped to equalise with aplomb.

Already assured of a place in history as Chelsea's match-winner in the UEFA Champions League final, Kai Havertz cemented his place in Blues folklore by securing the club's first world title. The German stepped up with 117 minutes on the clock to beat Weverton from the spot, albeit narrowly, just as a shootout appeared inevitable.