Hardik Pandya then joined Kohli in the middle. Even though the other batsmen failed to rise to the challenge, Kohli looked in complete control as he completed his half-century off 41 balls. After the completion of 15 overs, the score read 111/4 with India needing 76 more runs to win the game. 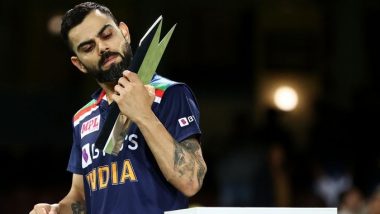 Sydney, December 8: Skipper Virat Kohli's 85 went in vain as Australia secured a 12-run victory over India in the third T20I here at the Sydney Cricket Ground on Tuesday. While India had already won the three-match T20I series after winning the first two games, Australia won the last game to avoid a whitewash.

Chasing a target of 187, India got off to a poor start as opener KL Rahul was sent back to the pavilion on the second ball of the innings. Opener Shikhar Dhawan was then joined by Kohli and both gave the team some momentum. Also Read | Virat Kohli Misses Out On Century Against Australia in 3rd T20I, Fans Praise Indian Skipper Despite 12-Run Defeat.

The duo took India over the 50-run mark in the sixth over and formed a 74-run partnership before Mitchell Swepson sent Dhawan (28) back to the hut. Sanju Samson was the next batsman, but he failed to impress as the batsman scored only 10 runs before Swepson scalped his second wicket of the day in the 13th over. In the same over, Swepson removed Shreyas Iyer, who was given LBW, as the pressure mounted on the Indians.

Hardik Pandya then joined Kohli in the middle. Even though the other batsmen failed to rise to the challenge, Kohli looked in complete control as he completed his half-century off 41 balls. After the completion of 15 overs, the score read 111/4 with India needing 76 more runs to win the game.

In the next over, Daniel Sams conceded 20 runs with Kohli and Pandya combining to hit three sixes. While Pandya looked in top form, his 20-run innings from 13 balls was brought to an end by Adam Zampa in the 18th over, with Washington Sundar then taking the field.

Andrew Tye handed Australia with the much-needed breakthrough of Kohli, who got out after scoring 85 runs. After Kohli's dismissal, Australia easily got over the line with India being restricted to 174 runs.

Earlier, a whirlwind fifty by Glenn Maxwell (54) and a quality half-century by Matthew Wade (80) powered Australia to 186/5. Wade scored his second fifty on the trot before Shardul Thakur caught him plumb in front of the stumps in the 19th over. But the damage was done by then as Australia dominated the whole innings and what made matters worse for the Indians was their poor fielding. India vs Australia Highlights 3rd T20I 2020: AUS Beat IND by 12 Runs, Visitors Take Series 2-1.

It finally took some quality bowling in the death overs to minimise the damage as Australia scored 47 runs in the last five overs. While India did start well, the sloppy show on the field undid all the good work of the bowlers.