Before the two teams face off in a much-anticipated four-Test series starting on December 17, Australia A are scheduled to play two three-day tour games against India A, which features Test specialists. 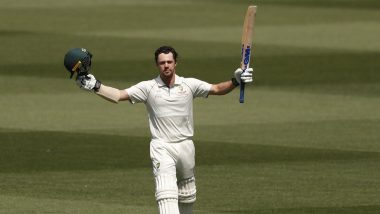 Sydney, December 5: Australia batsman Travis Head said they will look to test their skills against India's "unbelievable" bowling attack and put the visitors under pressure during the first warm-up game starting Sunday.

Before the two teams face off in a much-anticipated four-Test series starting on December 17, Australia A are scheduled to play two three-day tour games against India A, which features Test specialists. Also Read | Sanjay Manjrekar Hilariously Trolls Himself While Sharing a Picture With Legendary Australian Pacer Glenn McGrath.

The 26-year-old, who was part of the 2018 Test series, will lead the Australia 'A' side in the first three-day warm-up game. "Nice to have some memories and stuff from that series, but (they are) an unbelievable bowling attack and been well supported throughout the whole attack," Head said in a virtual press conference, facilitated by official broadcasters Sony Networks.

"... you get through the new ball and someone like (Mohammed) Shami comes on and he's just so relentless on his length. There was just no rest that, you had to be on for every bowler. "That is expected of Test cricket but that was my first real look at a quality attack like that. Those next spells are as strong as their first so you have to be on 100% of the time. Looking forward to that test again, again we have that chance."

While the first warm-up will be a red-ball affair, the second practice match scheduled to begin from December 11, will be played with a pink ball. "... it is a great opportunity with the red ball, the way we start that campaign in the same manner and we have three strong days and, I know the boys are really keen to start that three days and get leading into that test series," he said.

"(These are) really important couple of games for us, not just as Australian A squad but as Australian squad and we want to play our best foot forward and start putting the Indian guys under pressure." He also said that the Australian A team has been strong in the last one and a half years.

"But again, like I said earlier the squad that has come together, (it) is a great squad and over the 12-18 months, its been a strong Australia A team, which in-turn make a strong Australian team, guys are fighting for positions and guys have had great season." Head, who has played 17 Tests, said "it is a new opportunity to develop my leadership." IND vs AUS Dream11 Team Prediction: Tips to Pick Best Fantasy Playing XI for India vs Australia 2nd T20I 2020.

"...really looking forward to play with different guys and how different guys operate and working with them to hopefully have really good three days."

Asked what lessons he took from that series against India two years back, Head said: "A lot of things, my game has developed a long way since then. "I guess I had more test of Test cricket and I have had a couple of performances since that series, so you take confidence from everything you've done, you take experiences from every game you've played and every team you've come up against."

He said he had enough net sessions and was raring to go on Sunday.

"I am raring to go. I feel I have done enough net sessions now and enough training and I am not tired, I am really refreshed. "I am at perfect peak to get into the games and it is bit different to have this period off in the middle of the summer, it is going to be huge rest of the summer and huge test series," he signed off.