New Zealand's Ross Taylor (818) and Australia skipper Aaron Finch (791) round up the top five in the batsmen's list. 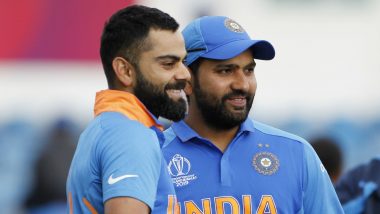 Dubai, January 27: India captain Virat Kohli and senior batsman Rohit Sharma retained their number one and two position respectively in the ICC rankings for ODI batsmen, while pacer Jasprit Bumrah remained at the third spot in the bowler's list. Kohli, who had scored 89 and 63 against Australia in his last two ODI appearance, has 870 points to his kitty.

Rohit, who missed the tour of Australia due to an injury and has not featured in any one-day game since the COVID-19 pandemic began, remained at the second spot, five points ahead of Pakistan skipper Babar Azam (837). New Zealand's Ross Taylor (818) and Australia skipper Aaron Finch (791) round up the top five in the batsmen's list. Rishabh Pant, R Ashwin in Contention for New ICC Player of Month Awards for January.

Ireland all-rounder Paul Stirling gained eight slots to reach 20th place after scoring 285 runs against Afghanistan which included centuries in the second and third matches. Afghanistan's Hashmatullah Shahidi (70th to 66th), Rashid Khan (96th to 89th) and Javed Ahmadi (103rd to 99th) have also gained in the rankings for batsmen.

Bangladesh spinner Mehidy Hasan Miraz, who was the most successful bowler in the recently concluded series against the West Indies, has progressed nine spots to take fourth position after grabbing seven wickets, including a haul of four for 25 in the second ODI that won him the player of the match award.

Bangladesh pacer Mustafizur Rahman's six wickets in the series has lifted him from 19th to eighth position. ICC Introduces 'ICC Player of the Month' Awards to Recognise 'Best Performances'.

Other Bangladesh players to gain in the latest rankings update include Shakib Al Hasan (up 15 places to 13th among bowlers) and Mushfiqur Rahim (up one place to 15th among batsmen) after their player of the match performances in the first and third matches respectively.