After registering a seven-wicket win over South Africa in the first Test, Pakistan skipper Babar Azam on Friday applauded Fawad Alam and Azhar Ali for scoring runs and added that debutant Nauman Ali displayed his first-class experience on the international stage. 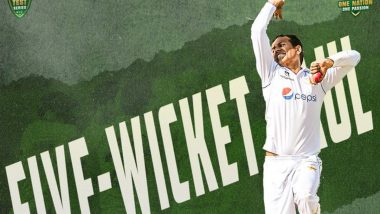 Karachi, January 29: After registering a seven-wicket win over South Africa in the first Test, Pakistan skipper Babar Azam on Friday applauded Fawad Alam and Azhar Ali for scoring runs and added that debutant Nauman Ali displayed his first-class experience on the international stage.

Nauman made a memorable debut for Pakistan as he picked seven wickets, including a five-wicket haul in the second innings, to power his side to a seven-wicket win over South Africa on day four at the National Stadium.

"Credit to the players who have worked so hard. Wicket was quite slow. Our plan was to bat first, but we were able to adjust our plans. I spoke at the toss of how important partnerships were. The way Fawad Alam and Azhar Ali revived the innings was so brilliant. Then Nauman Ali and Yasir Shah bowled really well aided by the fast bowlers. South Africa are a quality team, their pacers are very good. The way Nauman Ali played on debut, he showed his first-class experience," Azam said after the match. Babar Azam Praised on Twitter for Making Winning Start to his Test Captaincy Career as Pakistan Defeat South Africa in 1st Test at Karachi.

With this win, Pakistan has taken a 1-0 lead in the two-match series. Chasing the target of 88, Pakistan openers Imran Butt and Abid Ali avoided risky shots as the team was not chasing a huge target. However, Anrich Nortje came out all guns blazing in the eighth over, removing both Abid (10) and Butt (12).

Azhar Ali and skipper Azam then joined hands in the middle. Both played brilliantly, scoring regular boundaries but with the team just two runs away, Keshav Maharaj dismissed Babar (30) in the 23rd over. Fawad Alam then came out and hit a boundary to take Pakistan over the line.Earlier, resuming the second innings on 187/4, South Africa got off to a very poor start on day four as Hasan Ali dismissed Maharaj. Quinton de Kock was then joined by Temba Bavuma but their partnership also did not last long as Yasir Shah got hold of the former.

George Linde then stepped out in the middle and took the team over the 200-run mark, along with Bavuma. The duo handed South Africa some momentum and kept the scoreboard ticking. However, Nauman finally managed to end the partnership, sending Linde (11) back to the pavilion. Pakistan vs South Africa, 1st Test Match Result: Nauman Ali and Yasir Shah Spin Web Over Proteas as Hosts Register Seven-Wicket Win.

Bavuma continued his brilliant form but failed to get support from the other end as Pakistan bowlers kept taking wickets in regular intervals. Bavuma (40) was then given LBW off Nauman's delivery which brought South Africa's second innings to an end, setting a target of 88 runs for the hosts.