Champions League 2021 Final: Porto to Be Confirmed as Venue for Final Match Between Manchester City and Chelsea

The initial backup plan had been to use Wembley Stadium in London but talks with the British government stalled on Monday over being able to secure quarantine waivers for the guests and broadcasters required by UEFA to attend the game. 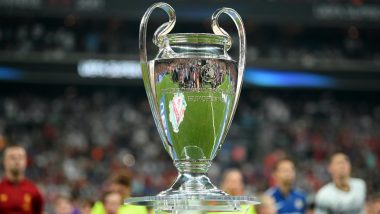 London, May 13: Porto is set to be confirmed as host of the Champions League final between Chelsea and Manchester City after Portuguese authorities have approved the return of supporters to stadiums.

UEFA is planning to announce by the end of the week that the 50,000-capacity Estádio do Dragão will be used for the May 29 showpiece with thousands of fans from both English clubs set to be allowed into the game, people with knowledge of the planning told The Associated Press on Wednesday. They spoke on condition of anonymity to discuss the talks.

Stadiums have been closed to spectators in Portugal but pandemic restrictions are being eased to allow them to be at 10% capacity for the final round of league games next Wednesday. Champions League 2021 Final Match Between Manchester City and Chelsea Will Reportedly Take Place in Portugal.

UEFA is hoping for more than 10,000 people to be at the Porto stadium after having to move the final from Istanbul to Portugal for a second successive year.

The initial backup plan had been to use Wembley Stadium in London but talks with the British government stalled on Monday over being able to secure quarantine waivers for the guests and broadcasters required by UEFA to attend the game.

Portugal is on England's “green list” of 12 low-risk territories where people can travel from next Monday without having to quarantine upon their return, making it easier for City and Chelsea fans to attend the game.

Istanbul became impractical for the Champions League final once the British government announced on Friday that Turkey was being placed on the “red list” of countries requiring anyone returning to enter mandatory hotel quarantine for 10 days. Premier League 2020-21: Emile Smith Rowe Scores Sole Goal As Arsenal Beat Chelsea 1–0.

UEFA on Wednesday announced that the referee for the final will be Antonio Mateu Lahoz, who sent Pep Guardiola off during a game three years ago. The City manager confronted the Spanish official for ruling out a goal as his team lost to Liverpool in the quarterfinals of the Champions League in 2018. Mateu Lahoz has officiated in six matches in the elite European club competition this season.