IND vs AUS T20I 2020: Mitchell Starc to Miss Final Two T20Is Against India Due to Illness in Family

Skipper Aaron Finch is also a doubtful starter after he picked up a niggle on his hip during the first T20I. 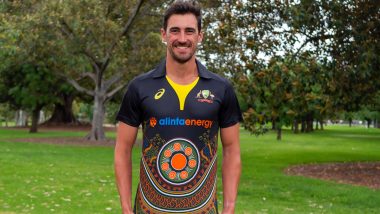 Sydney, December 6: Australian pacer Mitchell Starc has pulled out of the remainder of the T20 series against India due to an illness in his family. The 30-year-old pacer had missed the third ODI due to back and rib niggles but returned to claim two wickets in the 11-run loss in the first T20I in Canberra on Friday. Also Read | Happy Birthday Karun Nair: A Look Back At 5 Best Performances by Karnataka Player.

He had arrived in Sydney on Saturday but soon left the team bubble after learning about a family illness. "There is nothing in the world more important than family and in this case Mitch is no exception," said Australia head coach Justin Langer said in a statement. Also Read | RP Singh Birthday Special: Quick Facts to Know About the Former Indian Pacer.

"We will give Mitch all the time he needs and welcome him back into the squad with open arms whenever he feels the time is right for him and his family." The second and third T20Is are scheduled on Sunday and Tuesday.

The opening Day-Night Test starts in Adelaide from December 17 and it is not clear when Starc will be rejoining the team. Australia is dealing with a spate of injuries with David Warner and Ashton Agar ruled out of the limited-overs series with injuries, while Pat Cummins has been rested for the final ODI and the T20 series as part of his workload management.

All-rounder Marcus Stoinis is still with the squad despite not featuring in any match after suffering a side injury in the first ODI. Skipper Aaron Finch is also a doubtful starter after he picked up a niggle on his hip during the first T20I.