Get latest articles and stories on Sports at LatestLY. The results of the Preliminary Round of the first-ever Fit India Quiz, India's biggest sports and fitness quiz for students was announced today, amidst anticipation about which state has topped the ranking in the first round. 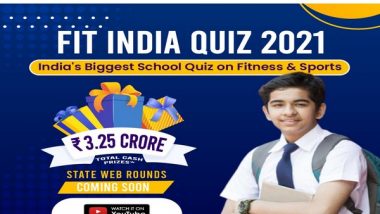 New Delhi [India], January 25 (ANI): The results of the Preliminary Round of the first-ever Fit India Quiz, India's biggest sports and fitness quiz for students was announced today, amidst anticipation about which state has topped the ranking in the first round.

Results of the nationwide competition organised by the Ministry of Youth Affairs and Sports have revealed that two students from Uttar Pradesh have outperformed students from all other states to become the top scorers of the Preliminary Round.

Among girls, the duo was followed by Arkamita of Baldwin Girls High School, Bengaluru, who is also the top scorer for the state, Karnataka.

The preliminary round of the Fit India Quiz, saw participants from 13,502 schools from more than 659 districts across the country, out of which students of 361 schools across 36 States and Union Territories have now been shortlisted for the State Rounds. The Quiz has prize money of 3.25 crores which will be given out to winning schools and students at various phases of the quiz.The Preliminary Round of the quiz was conducted by the National Testing Agency, the same institution that conducts the IIT and JEE entrance exams. Top scorers of the Preliminary round will move into the state round and compete to become their respective state champions.

The 36 school teams (winner from each State and/or Union Territory) will then move to the National Round that would take place later this year. The winners of the quiz at each level would win cash prizes (the school as well as the two participants) and the honour to be called India's 1st Fit India State/National level Quiz Champion.

The main aim of the quiz is to create awareness among students about India's rich sporting history and to also tell them more about India's centuries-old indigenous sports and our national and regional sporting heroes. (ANI)