Sports News | When Wyllie Comes to Crease, I Can Relax: Australia U-19 Skipper Cooper Connolly

Get latest articles and stories on Sports at LatestLY. St John' Australia U-19 skipper Cooper Connolly praised batter Teague Wyllie for a breakthrough batting performance which helped his side beat Pakistan in the quarter-finals of the ongoing ICC Men's Super League on Friday. 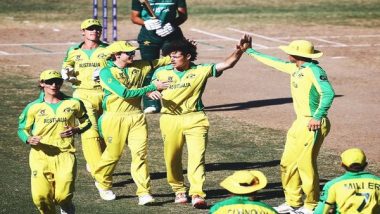 Wyllie's knock of 79 runs and a three-wicket haul by William Salzmann helped Australia to defeat Pakistan by 119 runs and secure a semi-final spot.

"There was some discussion for us before the game about what we wanted to do. In the end, we were happy to bat first. I feel like when he (Wyllie) comes to the crease and plays a few shots, I know he is on and I can sit down, relax. With the bowling, we were quite accurate and hit the right lines. We are a very strong bowling unit with a good variation of pace," said Connolly after the game.

"We didn't bowl well after winning the toss. Australia batted well, got solid partnerships, credit to their batters. 276 was a big total but we didn't bat well enough to try," said Akram.