Get latest articles and stories on Sports at LatestLY. Union Minister of Law and Justice Kiren Rijiju on Saturday congratulated the Indian women's hockey team on winning a bronze medal in the Women's Asia Cup 2022 in Muscat, Oman. 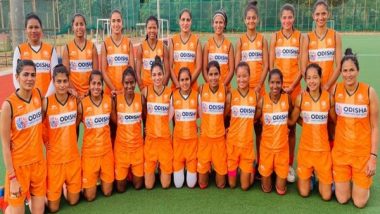 India defeated China 2-0, where goals by Sharmila Devi (13') and Gurjit Kaur (19') helped the Savita-led side end the continental tournament with the third-place finish.

"Congratulations to the Indian Women's Hockey Team on winning the Bronze medal in the Women's Asia Cup 2022 after defeating China 2-0. The whole country is proud of their performance. May the team bring more laurels for India," tweeted Kiren Rijiju.

It was a neck-and-neck start to the match, with both teams trying to make inroads in each other's striking circle, showcasing good attacking and defending skills. Both India and China created potential goalscoring opportunities and even earned themselves Penalty Corners, but both teams missed out on converting it. (ANI)