As the hit Marvel movie Avengers: Endgame clocked two years of its release, the Captain America. 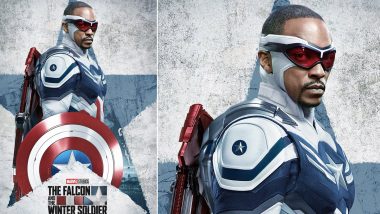 Besides the photo, the Twitter account bio was also changed from 'Just a kid from Brooklyn' to 'On your left', a line that was first used by Rogers in 'Captain American: The Winter Soldier' and later adopted by Wilson in 'Avengers: Endgame'. Marvel Studios also released an official poster of Mackie in his brand-new, red-white-and-blue super-suit, complete with accents and embellishments reminiscent of Evan's Captain America. The caption alongside the photo read, "I'm Captain America." The Falcon and the Winter Soldier Finale Review: An Exhilarating Finish to Marvel’s Disney+ Series That Goes Way Deeper Than You Think! (LatestLY Exclusive).

Along with the iconic shield, Wilson as Captain America also sports a brand new suit gifted to him by the Wakandans. While it is unclear whether the show will receive a second season, The Hollywood Reporter revealed last week that a fourth 'Captain America' film is currently in the works, written by 'Falcon' showrunner Malcolm Spellman with co-writer Dalan Musson, to be focussed on Wilson.

'Avengers: Endgame' marked the end of a decade-long plot that started with 'Iron Man' and spanned over 22 films in the Marvel Cinematic Universe.

The movie, which became the highest-earning film of all time, was dethroned from the No. 1 spot after James Cameron re-released his film 'Avatar' in theatres after COVID-19 restrictions were eased in parts of the world.