Cricket West Indies and the national squad has unveiled the new T20 playing jersey ahead of the upcoming three-match series against New Zealand. 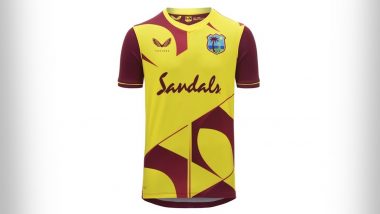 St John's, November 21: Cricket West Indies and the national squad has unveiled the new T20 playing jersey ahead of the upcoming three-match series against New Zealand.

The T20I shirt features an eye-catching, contemporary maroon and yellow geometric pattern on the shirt front, with contrast maroon sleeves. The bold, vibrant colours and design are a trademark of the #MenInMaroon, one of the most successful, exciting, and skillful teams in world cricket.

The playing shirts are made with a premium, lightweight performance stretch fabric and are available in both short sleeve and long sleeve versions.

The T20I shirt will be worn for all T20I matches in the build-up to the ICC T20 World Cup and in all West Indies Women's T20I matches.

West Indies are the defending and two-time men's T20 World Champions, having won World Cups in 2012 in Sri Lanka and again in 2016 in India.

"We're really excited for the new T20I shirt to debut with the West Indies Men's team in New Zealand. We know that fans will love the bold design and rally behind the #MenInMaroon for this series and throughout 2021," Dominic Warne, CWI's Commercial Director, said in an official statement.

West Indies and New Zealand will lock horns in three T20Is against each other. The first match will be played on November 27.