World News | Ahead of Winter Olympics, Sponsors on 'tightrope' Amid US-China Tensions

Get latest articles and stories on World at LatestLY. Ahead of Beijing Winter Games, sponsors of the Olympics are walking a tightrope as worsening geopolitical tensions force them to consider downplaying their involvement without upsetting China. 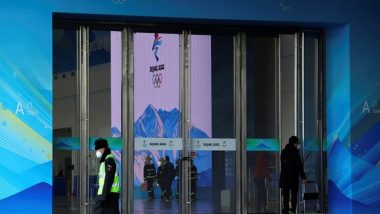 Beijing [China], January 29 (ANI): Ahead of Beijing Winter Games, sponsors of the Olympics are walking a tightrope as worsening geopolitical tensions force them to consider downplaying their involvement without upsetting China.

Political fervour in the United States reached a high last month as the White House called for a diplomatic boycott of the Games, a statement against human rights abuses that Washington has accused Beijing of perpetuating in the country's western Xinjiang region.

Mark DiMassimo, the founder and creative chief of DiGo, an advertising agency in New York, said sponsors appear to be downplaying their involvement, at least in the lead-up to the Games.

"You don't see the typical promotion of their Olympics advertising in advance. You'd be typically seeing it at this time, and we're not," CNN quoting him reported, adding "I think they're trying not to make themselves the story."

The United States call for a diplomatic boycott of the Games in past months over the human rights abuses in China western Xinjiang region, have added to pressure on multinational corporations which in recent months have faced calls to cut ties with the event because of Xinjiang, CNN reported.

According to CNN, critics question the value of sponsoring an event that won't be selling tickets to the public due to COVID-19 pandemic curbs.

Tension arises when the US joined in its diplomatic boycott by the United Kingdom, Australia, Canada and Denmark, which each announced they would not be sending any government delegations to the events.

However, China, for its part has called on the international community to "depoliticize" sports and warned that countries could "pay the price for their mistaken acts."

According to DiMassimo, the Chinese government has also repeatedly denied all allegations of human rights abuses. But for businesses, the diplomatic firestorm set off a gigantic scramble.

There were "lots of late-night Zoom calls and meetings as advertisers tried to figure out what to do," he said, referring to the aftermath of the US boycott.

Meanwhile, experts say that the Olympics' top partners collectively pay billions of dollars to sponsor the Games, including fees paid to organizers and additional marketing costs.

But analysts suspect their advertising push this year might be a lot more muted than that number would merit. (ANI)