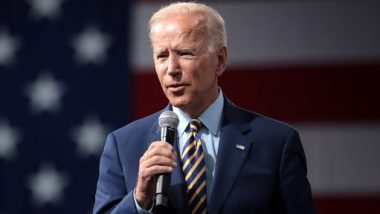 Beijing, June 10: A relieved China on Thursday welcomed the US move to drop the Trump-era executive orders to ban its popular apps TikTok and WeChat, saying it is a "positive step in the right direction". The US should treat Chinese companies fairly and justly and refrain from politicising trade issues, state-run CGTN quoted Commerce ministry spokesperson Gao Feng as saying.

However, he said, the Biden administration's move to revoke orders against banning Chinese apps was a "positive step in the right direction". The White House on Wednesday revoked the previous government's ban on short video sharing platform TikTok and messaging app WeChat and said the Biden administration will conduct its own review aimed at identifying national security risks with software applications tied to China. TikTok, WeChat Ban Lifted, Joe Biden Signs New Orders to Shield US Information.

The US order to lift the ban on the Chinese apps came as a relief here as much to the chagrin of Beijing, the Biden administration has been following the Trump-era hardline policies against China, deepening the discord between the top two major economies of the world.

Asked for his reaction to the US move to lift the ban orders, Chinese Foreign Ministry spokesman Wang Wenbin told a media briefing here on Thursday that the US should stop abusing state power to suppress Chinese firms.

“The US side should earnestly respect principles of market economy, international economic and trade rules, stop overstretching the concept of national security, stop abusing state power to Chinese high tech companies and treat Chinese enterprises in a fair, just and non-discriminatory manner.

“The Chinese government continue to safeguard the legitimate rights and interests of our companies," he said. The US ban on the Chinese apps followed after India banned TikTok along with 267 other Chinese apps due to security concerns. TikTok is owned by Chinese tech unicorn ByteDance.

Former US President Donald Trump during his tenure constantly attacked ByteDance and TikTok as being a threat to US national security. His administration contended that WeChat and TikTok posed national security concerns because sensitive personal data of US nationals could be collected by Chinese government.

American politicians and officials had also expressed concerns about users' personal data being passed on to the Chinese government. Both TikTok, which has over 100 million users in the US, and WeChat have denied the allegations.

Following the ban orders issued by the Trump administration, TikTok had moved the US Court of Appeals for the District of Columbia Circuit to review the decision.

Significantly, the Biden administration's move to lift the ban from TikTok and WeChat came as Washington and Beijing held the third round of trade consultations on Thursday.

China's Commerce Ministry said in a statement that both sides “had a candid and pragmatic exchange of views on relevant issues and mutual concerns in the China-US business field”.

“The two sides stated that dialogue and exchanges in the field of business between China and the US are very important, and they agreed to promote the healthy development of pragmatic trade and investment cooperation and properly handle differences. Both parties agreed to continue to maintain communication,” it said.

Liu and Tai held talks on May 27. It was the first dialogue held between the top trade negotiators from China and the US since Joe Biden took over as the president of the US. On June 2, Liu held talks with Yellen.

The latest talks followed the White House announcement on Tuesday that the Biden administration will establish a trade strike force, led by Tai, to halt the “hollowing out” of American industry and the erosion of critical supply chains for products such as semiconductors and medicines, the Hong Kong-based South China Morning Post reported.

The measures were contained in a 255-page review released on the same day the US Senate passed a sweeping USD 250 billion bill to boost US competitiveness in the face of mounting geopolitical tension with China.

Trump kicked off a trade war with China in 2018, demanding that Beijing should reduce the mounting trade deficit between the two countries. The whole lot of tariffs clamped by him on large Chinese imports is continued so far in the Biden. administration as well.