It was acquired by the RAF as a troop carrier and air tanker before undergoing the Cameron-led makeover in 2016, lending it an initial reference of “Cam Force One”. 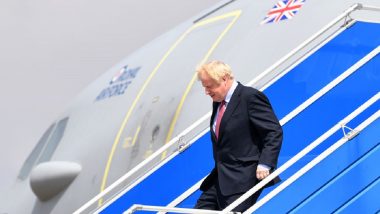 London, June 17: A military plane used by British Prime Minister Boris Johnson and other senior government VIPs is undergoing a so-called Brexit makeover in the red, white and blue colours of the UK's Union Jack flag.

The Royal Air Force (RAF) Voyager aircraft is to have its current grey look refurbished, indicating the UK Prime Minister's intention to use the plane for global Britain trade missions as the UK's transition period before a complete exit from the European Union (EU) concludes at the end of this year. Also Read | Andhra Pradesh | Lorry Hits Tractor at Vedari Village of Krishna District, 7 Dead: Live Breaking News Headlines & Coronavirus Updates, June 17, 2020.

According to several British media reports, UK defence sources said the plane is being repainted at a specialist secure hangar run by Marshall Aerospace near Cambridge, a move confirmed by Downing Street. "An RAF Voyager is currently in Cambridgeshire for pre-planned works," an RAF spokesperson said. Also Read | India-China Face-Off in Ladakh: Foreign Ministers of Both Countries Discuss Issue Over Phone; S Jaishankar Asks Chinese Side to 'Reassess its Actions'.

The aircraft, often likened to the US President's Air Force One, was commissioned at a cost of GBP 10-million by former UK Prime Minister David Cameron and was intended to have a dual civilian and military use.

“What I will say about the Voyager, I think it's great, but it seems to be very difficult to get hold of. And also, why does it have to be grey,” Johnson had said when he was Foreign Secretary in the Theresa May led government in 2018. At the time, he had expressed his wish for a "Brexit plane" to help him travel the world and strike new trade agreements.

The twin-engine A330 Voyager jet is earmarked for use by the UK prime minister, Foreign Secretary and senior members of the Royal Family. It was acquired by the RAF as a troop carrier and air tanker before undergoing the Cameron-led makeover in 2016, lending it an initial reference of “Cam Force One”.