Get latest articles and stories on World at LatestLY. After more han 50 government ministers or aides of British Prime Minister Boris Johnson resigned on Thursday, he agreed to step down. 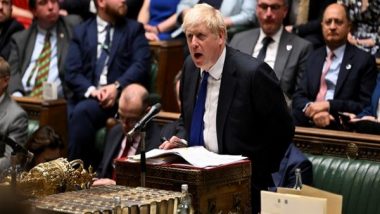 The British Foreign Secretary Liz Truss has also cut short her trip to a G20 meeting in Indonesia to return to London, CNN quoted Britain's PA news agency as reporting on Thursday.

Truss is widely seen as one of the potential contenders for the leader of the Conservative Party. Johnson finally agreed to step down after one of his closest allies, Treasury Chief Nadhim Zahawi, told the prime minister to resign for the good of the country. It was not immediately clear whether Johnson will stay in office while the Conservative Party chooses a new leader, who will automatically become prime minister as well. A formal announcement is expected later Thursday, reported Washington Post.

"Prime Minister: this is not sustainable and it will only get worse: for you, for the Conservative Party and most importantly of all the country," Zahawi said in a letter to Johnson. "You must do the right thing and go now."

The latest minister to resign is Environment Minister Rebecca Pow. The MP announced her decision with a series of tweets this morning, after reports Boris Johnson resigned as Tory leader.

Pow said her decision came as "values, integrity and the morals by which I live are at stake".

"This week I've been at home with COVID-19. Earlier this morning I tendered my resignation as Environment Minister. Values, integrity and the morals by which I live are at stake, and the needs of the country must always come first. My letter follows," tweeted Pow.

Caroline Johnson and Luke Hall, deputy chairs of the Conservative Party, and Rob Butler, a Parliamentary Private Secretary (PPS) at the Foreign Office, announced their resignations on Thursday.

In her letter to UK Prime Minister Boris Johnson posted on Twitter, Caroline Johnson said "it is with great sadness, however, that I recognize that over time the cumulative effect of your errors and judgment and domestic actions have squandered the goodwill of our great Party, Conservative colleagues, and many of my constituents."

Hall in a letter to the prime minister said that "I had taken the view that there must be parliamentary oversight of the inevitable leadership contest. However, there are others who can provide that. The current situation is clearly untenable."

Butler also shared his resignation letter to the prime minister on Twitter, saying: "Loyalty is rightly highly regarded in politics; we succeed as a team. But I can no longer reconcile loyalty to you as Prime Minister."

A total of 58 ministers have resigned from the government, reported CNN.

"Home Secretary Priti Patel, told Johnson that the general view of the Conservative party was that he had to go," CNN reported.

Earlier today, another minister of his government Brandon Lewis resigned from his position, saying that he no longer believed the values of honesty, integrity and mutual respect are being upheld by Johnson's government.

Prime Minister Boris Johnson of Britain tried frantically on Wednesday to salvage his position, even as a delegation of cabinet colleagues traveled to Downing Street to plead with their scandal-scarred leader to step down.

The UK Prime Minister initially refused to go without a fight, sacking close ally and senior cabinet minister Michael Gove, who tried to make Johnson accept his time is up, according to sources.

Johnson, 58, managed to remain in power for almost three years, despite allegations that he was too close to party donors, that he protected supporters from bullying and corruption allegations, and that he misled Parliament and was dishonest to the public about government office parties that broke pandemic lockdown rules.

However, Johnson could continue to serve as Prime Minister until his Conservative Party selects a new leader. It is possible that he will remain in office until October, when the Conservative party meets for its annual conference.

Conventionally, when a Conservative leader resigns, they give the party time to hold a thorough leadership contest. (ANI)