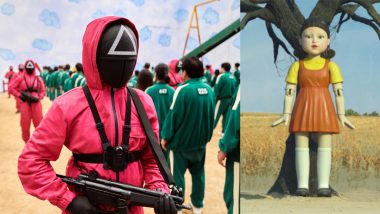 The distribution industry is enjoying an unexpected peak due to the popularity of Netflix original series Squid Game. Sales of game items such as dalgona candy, slap-match, and beads significantly jumped, and sales of snacks and ramen products that contain squid also increased. Ahead of Halloween, masks and costumes of 'Squid Game' are also gaining popularity.

According to the online marketplace G market, sales of dalgona kits, which appeared in the survival game of Squid Game, increased 610 percent compared to the previous month, from 17th of last month, when the Squid Game was released, to the 6th of this month. Sales of slap-match and tracksuits increased 95 percent and 89 percent respectively, and beads also increased 11per cent. Halloween 2021 Costume Ideas: Let Squid Game Be Your Halloween Inspiration This Year.

During the same period, sales of dalgona kits surged 717 percent in Auction, and slap-match and beads increased 490 percent and 360 percent respectively. How To Make Dalgona Candy or Ppopgi From Netflix’s Squid Game? Watch Recipe Video.

Ahead of Halloween, sales of costumes and event wear with Squid Game keywords increased 36 percent and 150 percent in G market and Auction, respectively. In particular, party masks with ^#* symbols increased 650 percent and 121 percent.

As kids' games gain attention, old school snacks which were eaten at the stationery store have also emerged.

According to the convenient store chain CU, sales of jjon-deu-gi and Danjjak candy increased by 51.2 percent and 33.0 percent respectively. Apolo (30.6 percent), Kkoedolyi (25.8 percent), and Batdoorung (24.2 percent) snacks also sold more than usual. Although they did not appear in the Squid Game, sales of Squid / Peanut Snack (24.1 percent) and Squid House Snack (26.9 percent) rose.