Polette had started raping her when she was only 12 or 13, CNN reported citing court documents. At that time he was her mother's boyfriend; he later became Bacot's husband and father of their four children. She previously referred to him as her stepfather before they married. 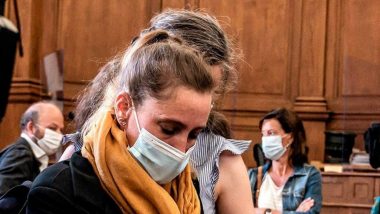 Paris, June 26: A French woman, who admitted to killing her husband after nearly two decades of abuse, left the court as a free woman after the court decided to release her on Friday. According to CNN, Valerie Bacot was sentenced to four years in prison, with three of those years suspended. She was released because she had already spent a year in prison, Bacot's lawyer, Nathalie Tomasini, said outside the Chalon-sur-Saone court in France.

Bacot's ordeal had reportedly appalled many in France. She left the court to loud applause from well-wishers. "I would like to thank the court and all the support that I've had from everyone. Now is the time for a new fight for all the other women and all the mistreatments," Bacot told journalists, adding that she was "rather emptied mentally and physically". "This woman will go back to her children tonight. For me that is a huge victory," Tomasini added.

Bacot had admitted to shooting Daniel Polette in 2016. Polette had started raping her when she was only 12 or 13, CNN reported citing court documents. At that time he was her mother's boyfriend; he later became Bacot's husband and father of their four children. She previously referred to him as her stepfather before they married.

Earlier on Friday, Bacot had fainted with apparent shock and relief after hearing the sentence sought against her by prosecutors would mean she would walk free. She was facing a life sentence for shooting Polette dead.

In her bestselling book "Tout Le Monde Savait" ("Everyone Knew"), published in May, Bacot, 40, said Polette, 25 years her senior, first raped her when she was 12 years old, impregnated her at 17 and went on to abuse her over the course of 18 years.

"I simply wanted to protect myself. Protect my life, the life of my children. In my eyes, nothing else ever mattered," she wrote in her autobiography. In her book, Bacot said that killing Polette was the only way to protect herself and her children from a man who had made her life "hell" from the time he first raped her until she shot him dead in 2016.

Everyone knew that Polette was violent, Bacot wrote in her book, in which she recounted how Polette, who was her mother's partner , abused her for years. However, Bacot's mother Joelle Aubague defended herself in court on Wednesday, saying it "all happened behind her back," CNN reported quoting French media.

Bacot became pregnant at the age of 17, and Polette installed her in a flat with him, according to court documents. A spokesperson for Bacot's support group , Florian Maily , told CNN that support for Bacot started locally by word of mouth, but quickly expanded across France, and then Europe.

"I think that what touches people is that this is completely horrific. This story is really shocking and abnormal, but at the same time it touches upon the societal issues that we are aware of: incest, or MeToo, and others," said Maily.

This case was very similar to that of Jacqueline Sauvage, a French woman sentenced to 10 years in prison after fatally shooting her abusive husband in 2012 -- just one day after their son took his own life. Sauvage was pardoned in 2016 by then-President Francois Hollande and freed from prison.